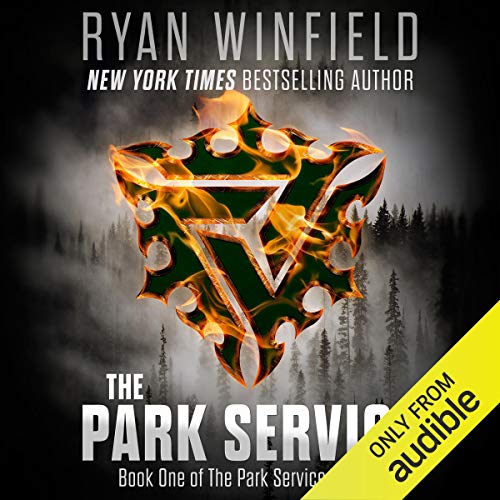 By: Ryan Winfield
Narrated by: Michael Braun
Try for $0.00

If Eden doesn't kill you, the Park Service will.

In the post-apocalyptic future, a fifteen-year old boy stumbles on a paradise where the few remaining humans live on the run from deadly drones controlled by a mysterious Park Service. Now this boy must learn to survive in a world he never dreamed existed while searching for answers to why everything he was taught is a lie.

What listeners say about The Park Service

Would you consider the audio edition of The Park Service to be better than the print version?

Not better, but gives it a new dimension. I think I enjoyed listening so much because I read It first. But I absolutely love reading!!! I actually read along with it at first because I was not sure about it. I have never been interested in listening to books. Now I am a believer and can't wait to listen to all my favorite books.

It has a good solid story line with strong character's that you find yourself caring about. There is plenty of background given so that you get to know them.

What does Michael Braun bring to the story that you wouldn’t experience if you just read the book?

He did a wonderful job reading the book and getting into each character. He brought them to life!!!

There were a few such moments such as when Aubrey was in the elevator, the doors closing and his dad told him that he loved him. And actually there were a lot of moments that brought up different emotions, a sign of excellent writing!!

The only issue I had was that the screen on my kindle would say I was on say chapter 10, when it was actually on chapter 8. It was that way throughout the book. It did not take away from the experience of listening, just thought you might want to know....

This book was unbelievable from the start. And then he gets to the surface and it was almost cartoonish in its description. I expected a unicorn to stroll by or a fairy to flit among the flowers. The main character knew what too many archaic items and terms were....I don't care how many books he had read. I could not recommend this book in good conscience. I wasted a credit on this.

Serviceable Tale Grows in the Telling

I've been disappointed by a few books that start out well and then start dropping stars as they unfold. The Park Service goes in the other direction. It begins the same formula as other YA dystopian novels -- teenager living in a post-apocalyptic underground bunker (cf Wool, Mockingjay), insecure in his unique abilities (cf. Divergent, Hunger Games), faces a test that will determine his place in society (cf. Divergent, The Giver), places higher than expected because of his unique abilities.

Yawn! Been there, done that. But then Aubrey, as the boy is named, is released into the real world by accident and discovers the true nature of his world. And The Park Service starts to get progressively more interesting from there. Not because it suddenly takes an original turn, still adhering to the formula of this genre in which Aubrey becomes the unlikely hero who exposes and tries to correct the realities of his dystopian society.

No, what makes it work are the moral themes author Ryan Winfield introduces, some in the form of dilemmas that Aubrey faces -- social injustice, environmental injustice, the noble savage vs. hard science, social structures built on the promise of heaven, and humanism. I found myself wavering trying to grasp where Winfield was coming down on these issues, trying to discern if there was a hidden agenda here, but I couldn't find one -- he presents all sides of each issue, and ultimately allows humanism to win the day.

Having bought The Park Service from Audible's Hidden Gems sale, I'd have to agree in the end that this far less well known entry in the popular canon of YA dystopian fiction lives up that billing, despite its pedestrian first half. An interesting listen for old adults like me, a good thematically-based science fiction action adventure for young adults.

What did you love best about The Park Service?

This is a book with a premise worth thinking about, discussing, even arguing about. What if the only way to save the world was to wipe out the human race? I really love a story that leaves me something to think about.

What other book might you compare The Park Service to and why?

The underground colony makes me think of The City of Ember. It's a different future, but the life in a limited world, then escape into the larger world is reminiscent.

I suppose the scene when Aubrey learns to clean fish got to me in particular. The older man had seemed like he would never accept Aubrey, and then he gave him an important lesson and gifted him with his knife.

It made me angry when I thought of how much cruelty most people endured because of a few scientists who couldn't find a better way to deal with the dilemma of humans versus nature.

You really need to read all three books. This one just hints at what's coming next, and you won't expect most of the turns the plot ends up taking.

If you could sum up The Park Service in three words, what would they be?

Jimmy is my favorite because he is smart with a lot of practicle things and yet blissfully ignorant of technology and understands a balance between man and nature, survival and domination.

Flooding the foundation with the destruction of Eden.

The devastation in the cove during the slaughter. It was written and described in such a fashion that I could feel my sympathy growing for Aubrey having to watch it happen. I could almost feel his horror, and picture his awestruck expression.

Having read the book, I was extremely impressed with this audio book. The narrator spoke in a voice that was almost exactly what I had in my head as Jimmy's. Additionally, the way he was able to speak for each character and capture their personalities was nigh on perfection.
This book was well written and now stands among my favourites. The characters are balanced amongst themselves. You have action, romance, mixed with events that really have you wanting to see (or hear rather) what happens next.
Even though I had previously read the books, listening to it in the car I found myself upset when I reached my destination as I didn't want to turn it off, I wanted to keep listening to the next big event in the book.
Listening to the narrator describe the landscapes, the events and the characters, being so well written, I found myself unable to find any negatives with this book.
I almost enjoyed the audio book better (almost) than reading the book on my Kobo app.
To Ryan Winfield, thank you for writing such a good book, and please write more in this genre.
Now I move on to Book 2: Isle of Man, and I can't wait to hear the narrator capture the character personalities as this story moves on and develops.

Give it a chance.

Started off slow but really enjoyed it once it picked up. (about an hour in) I plan to get and look forward to the next book in this trilogy.

Would make a good SF movie

Reminiscent of other works, but I felt it was well written & unique enough so that it was quite enjoyable. Main characters are mostly mid teens, but I felt it made little difference. No sex, which was nice for a change. Review by Rick

Once I started I couldnt stop, the story draws you in, makes your heart race and washing you with emotion.

This trilogy is my second listen, first time I listened I did not fully understand what was going on. The second listen woke my imagination fully and I enjoyed the trilogy. Even though the narrator was a bit on the "bland" side I found myself so intrigued I could not turn it off, this author is a good writer, and will give his work a better look.
Great series!

I was at first very apprehensive about this book. I honestly didn't know if I would enjoy it or not. Boy was I wrong. This is one of the best books I've read (or I guess listened to)! I am SO glad I decided to listen to it rather than read it. Braun's performance is phenomenal. One of the best I've heard. His voice and tone for the characters just feel right for them. Jimmy's voice is my absolute favorite. Its unique and consistent. Braun never seems like he's struggling or winging it when I reads Jimmy's dialogue. It just seems like he's channeling Jimmy. Its the same for all the characters.


Winfield's writing is so unique, too. His world building, his characters, his depth– it just so well-done!! The friendship/relationship (or more like they become brothers and I love it) between Audrey and Jimmy is one of the best written relationships I've ever read. The purity and intensity of it is something I wish more author's were brave enough to write. Most won't even approach the idea of two male characters ever becoming that platonically close and trustworthy of each other.

Anyway, I highly recommend this to all who are thinking about it. Listen and you won't regret it!