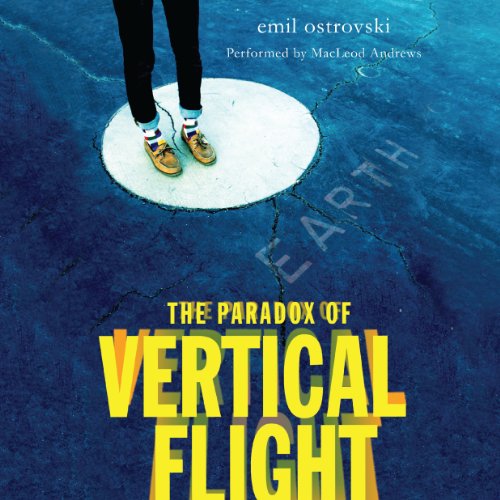 The Paradox of Vertical Flight

The Paradox of Vertical Flight

He woke up from a dream about dissecting frogs and measuring the bubbles produced by llamas. He just missed a call from Bob, his grandmother. He's not sure she'll remember he exists - which makes him sad, because he really loves her. He's thought about jumping out of the window. Not because he wants to die, mind you, but some attention would be nice. He's had a nonsensical conversation with his roommate, who is still asleep.

While in the dorm bathroom, he popped a zit and listened to some guy (who should not be singing) singing in the shower.

Jack's cell phone rings a second time. He recognizes the number. Jess. He never thought he'd hear from her again.

Guess what? Jack's day is about to get epic.

Emil Ostrovski’s debut novel is quirky and philosophic and tackles life’s grand questions. When you are 18 and thinking about the rest of your life, and you come face to face with your offspring, it’s an eye opening experience. It can open a door to enlightenment. Or at least it does for Jack.

Jack is on the precipice of adulthood. High school is over and everyone is scattered to pursue different paths. It’s hard to say dasvidaniya to your closest friends, and this road trip for Jack is like that last hurrah. And it’s Jack’s chance to impart any wisdom to his son Socrates (or vice versa.)

This book starts off a little crazy with Jack taking off with the baby, with no idea of what he’s doing. It’s like the book version of a Coen Brothers film with things spiraling out of control. Jack is a man on a mission and gets on the job parenting training. (I seriously worried about this infant) There are bumps on the road on this misguided road trip but lots to think about as well.

The writing is smart and engaging and infuses philosophy with pop culture nostalgia. Pokémon movie anyone? The book is more about friendship than romance, and I didn’t really miss the romance in this story anyway. Jack’s dialogues get a little long winded at times, and I admit I took a little break in between this book to read another. However, when I got back to the story I zipped through it to see how things would work out for Jack.

I listened to the audiobook, read by MacLeod Andrews (Steelheart, Will Grayson, The Spectacular Now), an awesome narrator. The dialogue is a little eccentric and the story unbelievable, though Andrews doesn’t miss a beat. I bought into Andrews’ reading of Jack, his timing is excellent, and he captures the humorous tone of the book. I think the audiobook is the way to go with this one.

This is an offbeat little book that won’t appeal to everyone. It’s about philosophy and babies (and sometimes babies that talk) and is really kind of strange. But, I bet that this coming of age is relatable to teens that are getting ready for college and not ready to face the future as well. John Green, Tom Leveen, or Stephen Chbosky fans should put this book on their radar.

Did MacLeod Andrews do a good job differentiating all the characters? How?

Yes, the narrator was the best part of the book.

The narrator was good.

I was hoping for a quirky book, but this was absurd at points. The only reason I kept listening was because the narrator was good and I hoped it would redeem itself. I never cared about the characters, and found the story dull and often rolled my eyes. I think it was just trying too hard to be meaningful.