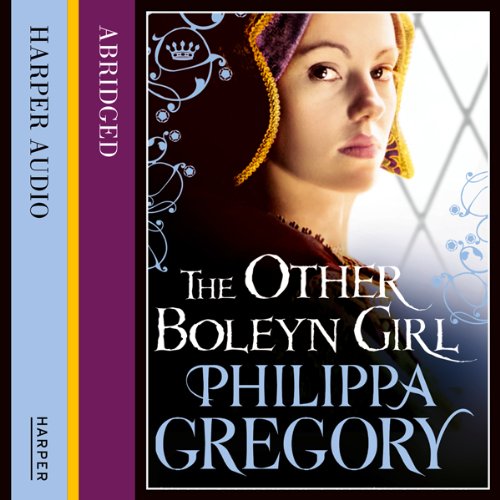 The Other Boleyn Girl

By: Philippa Gregory
Narrated by: Emilia Fox
Try for $0.00

Politics and passion are inextricably bound together in this compelling drama. The Boleyn family is keen to rise through the ranks of society, and what better way to attract the attention of the most powerful in the land than to place their most beautiful young woman at court? But Mary becomes the king's mistress at a time of change. He needs his personal pleasures, but he also needs an heir. The unthinkable happens and the course of English history is irrevocably changed.

For the women at the heart of the storm, they have only one weapon; and when it's no longer enough to be the mistress, Mary must groom her younger sister in the ways of the king. What happens next is common knowledge. But here it is told in a way we've never heard it before, with all of Philippa Gregory's characteristic perceptiveness, backed by meticulous research and superb storytelling skills.

"[A] fresh, wonderfully vivid retelling of the story of Anne Boleyn." (Publishers Weekly)

What listeners say about The Other Boleyn Girl

Brilliant! shame about the narrator

A brilliant listen. Don't know where the time went - it certainly made pounding the treadmil a lot easier and couldn't believe I'd got to the end. My only gripe was the particularly uninspired choice of Emilia Fox as the narrator. I found her voice annoyingly irritating when she was trying to be anybody but Mary Boleyn. She should leave male voices well alone! That aside the story itself was wonderfully written by Phillipa Gregory thereby offering an easy transfer as an audio book. I can't wait to see Eric Bana as King Henry in the movie now and for once I will know the entire story before the movie credits roll!

I thoroughly enjoyed Emilia Fox's narration. She has a lovely story-telling voice, but I can't decide whether I liked the novel or not. The plot is certainly compelling, but the quality of writing, when compared to other historical novels I have recently read (e.g. Imperial Woman, Alias Grace, Silence, The Last Empress, etc.) is mediocre.

The plot was good, the Three Boleyns intriguing. Ann was believable as an ambitious young woman reaching for the sun, but playing with fire. Mary, however, the main character, was somewhat irritating. The author didn't seem able to decide whether she was a pure-hearted victim of her ruthlessly ambitious family, which is how she sometimes came across, or as manipulative and cold as the rest of them. The line giving her reaction when she watched her sister killed, something along the lines of 'my rival was dead' was ice cold, yet the author seemed to also want to portray her as a simple, country-loving maiden who finally found true love and had been no more than her family's victim.

The overall story, however, is compelling, though the author missed the opportunity to address many serious questions, among the most obvious are:

Mary Boleyn was only 12 when she married, a fact that would be condemned as child abuse nowadays.
This was ignored. A modern audience will surely be questioning the impact this would have had on the young girl.

Ann Boleyn and others were beheaded for adultery, while Mary's husband had been forced to sacrifice his own marriage so that the king could bed his wife. This was ignored. Surely Mary would have had some reaction to this hypocrisy?

Henry VIII's illegitimate daughter, Catherine, was present in his court, but there is no indication as to his reaction to this, if any, and how the court politics would have worked in this instance. Was there any reaction from the king towards his daughter? If not, why not?

I may yet read the sequel, because the plot itself was extremely interesting.

Wow what an amazing book. Listened to it twice in case I had missed anything.

Captivating story and wonderfully read! Can't wait to move on to the next in the series.

Potentially this could have been a brilliant story to be told. We are all familiar, through history books, about Ann Boleyn but not about her sister, the King's mistress, Mary Boleyn. I loved this author when I was a teenager and read many of her books but now as a more mature reader, I found the story lacked any depth to hold my concentration. Shame

I was fascinated by this book. I couldn't put it down. I thoroughly enjoyed it and I would read other novels by this author .

Brilliant story shame about the narration

Really enjoyed this story! The only downfall was the narration. Emilia Fox should not do voices! And found it cringe worthy at times to listen to her. But apart from that it was good!

An engaging tale of love, loss, lust and life in the court of Henry VIII with excellent narration from Emilia Fox.

I listened to this book and the whole story fascinates me!
After I purchased the bbc film and it was such a let down! The story was changed and it just wasn't the same!

This book was an interesting and entertaining read which really brought history to life. I really enjoyed it.

ABRIDGED! Half the book is missing...

This was soooo disappointing. This is an abridged version and omits a number of really powerful scenes (I’ve read the hard copy enough times to know when something is missing!).
And the narrator has a horrid high voice that means that in order to vary it between characters, Anne has to be a high pitched idiotic sounding fluff head...the very opposite of the story’s message.
Waste of money.

Incredibly interesting story - gutted by what happened! Of course I already knew what would happen (it’s a famous story!) but the details and the way in which is was told made it seem fresh and painful in a way I didn’t expect.

Narration was not too bad but as I listened I realised the story has been severely cut short, not worth the download. Audible kindly refunded my credit upon request but I will not be ordering from Harperaudio again

My favourite book from Philippa Gregory

I have read a lot of Philippa Gregory's books now but this is a favourite. A compelling read with an excellent narrator

really enjoyed my first audible book. made boring car trip by myself easier. now to find out how much fact is mixed in with the fiction.