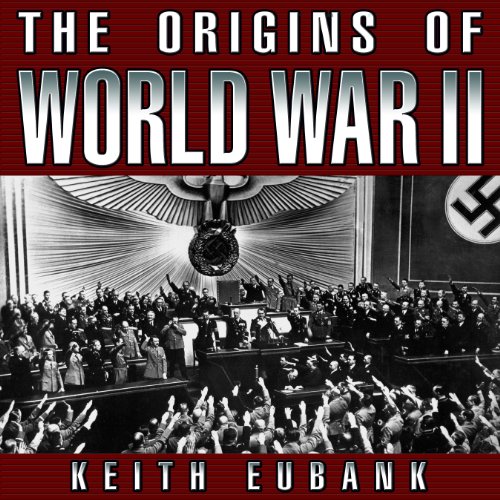 The Origins of World War II

The Origins of World War II

More than 60 years have passed since the outbreak of the most catastrophic conflict the world has known: 30 million people dead and unbelievable devastation.

In the third edition of this popular volume, Keith Eubank seeks answers to the questions that have plagued us: Why, after the ghastly ordeal of World War I did Western powers undervalue the threat from Hitler? Why was there so much reluctance on the part of Britain and France to confront Germany? Why had Germany been permitted to rearm and to occupy independent nations without a struggle? What was the policy of appeasement? Why did the appeasers fail to perceive Hitler's intentions?

In addition to a re-examination of these questions and an effort to dispel the enduring myths surrounding the history of this era, Keith Eubank has enhanced this new edition by including an analysis of the motivations and actions of central figures such as Neville Chamberlain and Joseph Stalin as well as a re-assessment of Soviet policies in the light of recent research that reveals their leaders as far less altruistic than some have imagined. With an expanded conclusion, an updated bibliographic essay, this audiobook remains an excellent brief overview of the period between 1918 and 1939.

What disappointed you about The Origins of World War II?

The shoddy production values. Among them thenarrator's inability to pronounce names,persons,places in particular.
The lack of citation for contradictory statements . Nothing new nor particularly riveting here.
It resembles nothing so much as a high school project for History class.
Sad

Would you ever listen to anything by Keith Eubank again?

Yes, but there's little to detract from.

What character would you cut from The Origins of World War II?

My own fault I should have listened to an excerpt and read the description more carefully.
Caveat Eptor !

.... the narrator ruins the listen by his constant mispronunciation of many German names and cities. How anyone could pronounce the name KEITEL as Kah-tall is beyond me.

The author disagrees with most historians on the point of whether or not England or France could have stopped Hitler prior to 1939. The author believes that England and France were not of the mindset to successfully challenge Hitler in any way militarily. While most historians believe this to be true, the author takes it a step further and believes that Germany would have been victorious in any pre-1939 engagement. Even though the conclusions the author reaches are not universally accepted, the book is still a good listen and is recommended. If only a better narrator had been employed .....