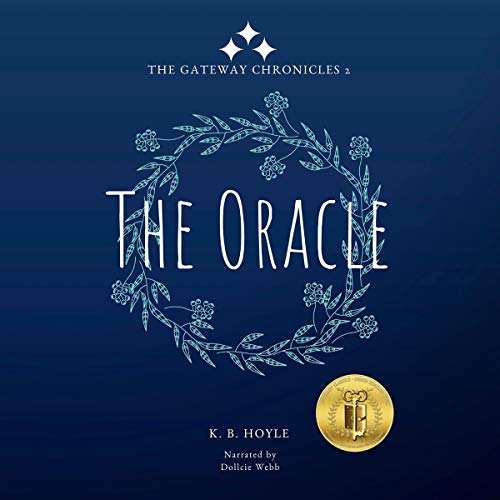 A year ago Darcy Pennington had no real friends. A year ago she'd thought that magic only existed in fairy tales. A year ago she would have laughed at the idea of other worlds. Then everything changed when she'd visited Cedar Cove Family Camp and stumbled into a magical gateway to a world called Alitheia.

It is the summer before freshman year and Darcy and her five friends have come back to Cedar Cove Family Camp and Alitheia. This return is bittersweet because her elusive purpose in the magical realm continues to evade her. Egged on by Tellius, the boy prince she is prophesied to marry, Darcy rebels and impulsively "petitions" an entity called the Oracle and requests it give her information as to her purpose. In order to receive her answer she must travel to the Oracle, and so she embarks on a journey along with her friends and Yahto Veli, the nark.

Too late she realizes her selfish entreaty has thrown the entire outcome of the prophecy itself into question and endangered everyone. Uncertainties mount between Darcy and her companions as they fight their way through enemy territory to locate the Oracle, and an unwelcome visitor from Cedar Cove adds a layer of mystery that none of them are prepared for. But the perils of the quest are nothing when compared to what lies in wait for her in the lair of the Oracle. There is a cost associated with every question asked - a cost that may be far greater than Darcy is willing to pay. And someone may choose to make the ultimate sacrifice to free her from it.

What listeners say about The Oracle

K.B. Hoyle's second installment in The Gateway Chronicles expands upon her world, characters, and lore in increasingly unpredictable, challenging ways while staying true to the age range and desires of the cast. The Oracle opens on the "children" being one year out from their return to Cedar Cove, eager to return, and full of questions left over from their first experience in Alitheia. Though we know they are prophesied to ultimately defeat Tselloch, there are endless possibilities of what Hoyle can do with the story between the beginning and the end six books later.

One of my favorite elements of The Oracle is the fact that the antagonistic force in the book is largely up for personal interpretation. Tselloch was introduced as the ultimate villain in The Six, and of course his reign of darkness persists as the main vein of evil in the series, whether personified in his followers the shadow creatures Tsellochim, the mindless slaves Tsellodrin, or as the Great Shadow himself. Though the creatures do make an appearance in this book, the conflict largely comes from an altogether separate force—one the reader is left up to decide. Is it the well-meaning, slightly condescending adults who try to shut things down and ignore the teenagers' concerns? Is it The Oracle, whose hold on Darcy is akin to torture in its intensity and persistence and whose answers are convoluted at best? Or is it Darcy herself, with her youthful, selfish desires acting as the driving antagonist?

Equally interesting is the way that Hoyle develops the magical world of Altiheia further here, introducing other lands like Mayim in the overall world of Orodreos through a flurry of new characters that enter the scene when Darcy must set out on her quest. The lore deepens, more history of the world and the Ecclektos line is revealed, and several unique magical compositions are explored right from the very beginning. As Hoyle dives into the layers of her world, it's equally gratifying to learn that while all are rich, not all of them are lovely, and even the wise, super-powerful elders and magical beings who mentor Darcy and her friends are capable of severe error and have made many in their respective pasts. In a way that both comforts and frightens as happens every time a revered adult reveals themselves to be fallable, Darcy has to learn to understand and accept them even as her world grows more complicated page by page.

Because of all these elements, The Oracle introduces a level of nuance that was lacking in The Six, merely because we are now familiar with the world and ready to challenge the first picture we were presented. Right from the start, Darcy challenges her role in the prophecy which kickstarts the driving action in the book and leads to repercussions and information that follow the series to the end. Each character takes on new shades of color, relationships deepen and are strained, and living and operating in the world of Alitheia suddenly means so much more than showing up and surviving in hidden keeps. This installment sets a tone of growing responsibility, sacrificial love, the importance of trust, the need to ask questions, and put old theories to the test.

The Six gives a taste of what K.B. Hoyle is capable of and sets the scene. The Oracle begins to execute the overarching story with boldness and beauty. Just wait until you see what The White Thread brings.

I've found that, with most of the YA fiction I've read, series will tend to go downhill after the high of the first book more often than not. Going in with that expectation, I have to say I was pleasantly surprised by this title - I actually enjoyed it MORE than the first one! Though I did very much enjoy the first book, I found myself wrestling with the fact that I found the main protagonist utterly unlikable. While this sequel doesn't completely remove that problem for me - I can definitely say that this volume showed a marked improvement on the issue!

Protagonist aside, I found the story itself an improvement as well. The stakes may not be quite as grand, but they make up for it by being much more personal and genuine. To be honest, I thi k the only serious gripe I have with this book is that there is much less time spent with my favorite elderly wizard (and his incredibly fun portrayal by Mrs. Webb).

On the topic of Mrs. Webb, I'm not sure what more I can say - if you've already heard her performance in the previous book in this series, you already know how much feeling and passion she puts into her work. She is definitely one of my absolute favorite upcoming narrators!

When do we get the rest?

Great continuation of the series! The story picks right back up and then leaves you wondering what will happen next. Eagerly waiting the audio release of the next book(s).

When I first discovered the Gateway Chronicles by K. B. Hoyle, I read the first one, gobbling down like I was starving for a good story. And maybe I was, because I was swept away and hooked for life. I’ve read this series repeatedly and it never grows old or becomes stale. Now with it in audio, with Dollcie Webb’s magical and marvelous narration, I feel I’m discovering the books all over again. And the Oracle is a perfect follow up to The Six. Each voice she has created for the characters seems to fit the person I have come to know them to be and brings them even more to life for me.

In this book, the six teens have returned to Cedar Cove and on to Alitheia through the magical gateway. Alitheia is a happier land, though still under the rule of the shadow. But teens are still teens, and when Tellius tells Darcy about the mysterious Oracle, a possible way to get an answer to the most burning question for them both, it sends some of the group off on a dangerous quest and culminates in a heartbreaking sacrifice.

As with each book in the series, I couldn’t put it down, had to read constantly, even though I knew where the story was going. I just could not get enough of the adventure, of the characters, of Cedar Cove and Alitheia, of this story that makes me wish so hard I could find my own Gateway and join them all in Alitheia.

Between the author’s engrossing tale, the narrator’s perfect interpretation, the music that adds just the right touch, I only wished it could go on and on. This series gets to my heart and soul. I highly recommend it for kids of any age and those adults who always longed to go on a magical adventure and never grew out of wishing they could!

This book was better than the first, which was very good. Teen dialog and drama done better than most any modern YA novelist. I'm really looking forward to the next in this series.

Narration was consistent throughout; I just don't love it. She's not bad, but her male voices are a little odd in my opinion.