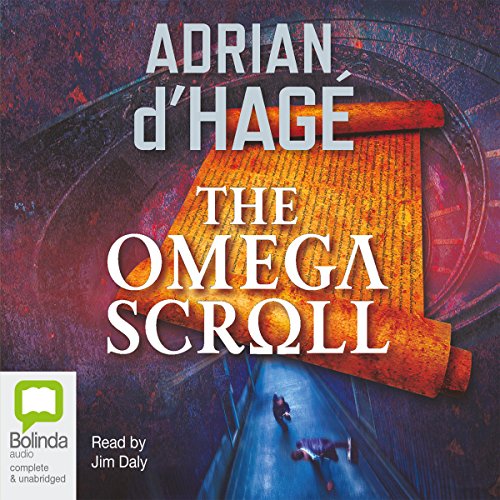 The Pope's health is failing and the Cardinal Secretary of State, the ruthless Lorenzo Petroni, has the Keys to St. Peter within his grasp. Three things threaten to destroy him: Cardinal Giovanni Donelli has started an investigation into the Vatican Bank; journalist Tom Schweiker is looking into Petroni's past; and, even more dangerously, the brilliant Dr. Allegra Bassetti, one of the world's foremost authorities on archaeological DNA, is piecing together fragments of the Omega Scroll in war-torn Jerusalem.

At the CIA's headquarters in Langley, Virginia, Mike McKinnon is investigating a number of missing nuclear suitcase bombs and suspects they are connected to the warning in the Omega Scroll. In the Judaean Desert a few more grains of sand trickle from the wall of a cave. The countdown for civilisation has begun.

Obvious knockoff of Dan Brown that spends much of its length as an anti religion diatribe. Hardest on Catholics but gives Evangelicals, Jews and Islam a few whacks too. Plot develops in a very predictable manner. Fairly PC in tone. That said, it is an OK listen if you don't have something better to do.

This book was terrible from the beginning. Part of the problem was the narration. He was just so flat and dull. I listened to the first seven hours in hopes that something was going to happen. It didn't. I listened for 3 more hours and finally gave up. Not worth the time or money.

Very hard to listen to this reader, he gives every single character (American, Italian, Israeli, Palestinian, Irish...) a buffoonish accent, and all the "bad guys" sound extremely drunk. The book is pretty good, but not great, it certainly can't withstand the terrible reading.

This might be a really interesting book. The plot seems intricate and engrossing -- as much of it as I could take in before the narration turned me off entirely. The narrator seems to believe that all Americans are brainless clods who twang in cowboy boots at the top of their lungs. The purported American accents are as false-sounding as they are offensive. I'm not very picky, but this was just too much.

The Omega Scroll is a great story. It has superb character development. I really enjoyed the plot, and the narrator is not as bad as the other reviewers make it seem. My only warning about this book is that it deals with corruption in the Vatican. If you can't deal with that, then move on, but you'll miss a great story!

A most enjoyable book.

This is a great book. Although fictional, its inclusion of actual historical events makes it quite entertaining as well as informative. I recommend it.

Gripping book but too heavy for me.

I liked how the scrolls were retrieved by the right people and how Cardinal donelli became pope instead of Patroni. I hated that some people who stood for good and peace died.

He was excellent at using different accents.

Did The Omega Scroll inspire you to do anything?

I'm glad I got through to the end of this book but once again, too much bloodshed and too much violence for my liking. I'm glad Patroni didn't get his way, or his grubby mitts on the keys of St. Peter.

This was the only audiobook I've ever given up on! Dreadful. The voice was almost as bad as the story.