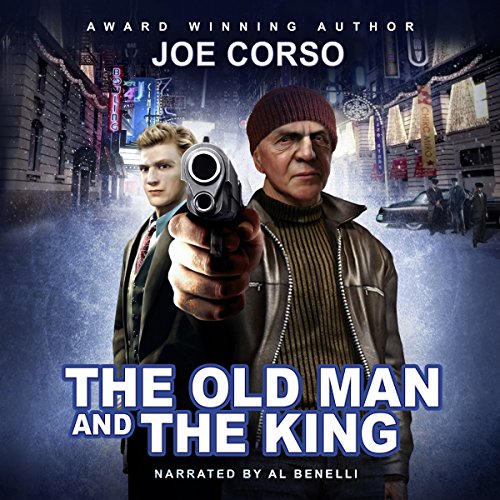 The Old Man and the King

Royal protocol dictated that the king exit the car last. But as the important man was about to emerge, a hail of gunfire erupted, spraying the royal Hummer. Alone, in a foreign city, he seeks temporary refuge in the Good Burger diner. Here he meets Lom, a crazy Korean War vet, who misses his old life of danger and intrigue and who embraces the idea of hunting those who are hunting the king. Lom does so by kicking ass and taking names, and by teaching the baby-faced king the ways of the street, battlefield style.

His written message is clear: "I heard you were looking for me. Now I'm looking for you!" This action-packed hunt for the assassins begins with the United Nations. It takes us from Charlie's New York City pawn shop into hidden train stations and desolate warehouses, and ultimately to carefully orchestrated deals with jewel thieves and gun runners. Things move along well until the heart-wrenching kidnapping.

With the clock ticking against him, Lom must think quickly in order to save the life of the one he loves. Will the old man make it in time? Will the King live? Only time, and his survival skills, will tell.

What listeners say about The Old Man and the King

I enjoyed reading this book. The characters seemed real. I really like the audibles books.

Bought this on a whim, never having heard of the author before. Boy! turns out that I'm smarter than I look. Fun action/adventure with murder and humor as side dishes. The publisher's blurb gives some of the characters' histories and the reason that they got together. No need for recap or spoilers here, just know that this is a great tale for any gender or age bracket!
A. T. Al Benelli does an interesting job as narrator.

What made the experience of listening to The Old Man and the King the most enjoyable?

I have read this audiobook in Kindle format but thought A. T. Al Benelli narration brought the book to life marvellously.

Listening to this audiobook, I very quickly found myself drawn into the plot by the author’s fantastic scene setting, and its engaging characters. I especially liked the brilliant and surprising character of the old man Lom (Who is no ordinary old man), and Toby, Charlie and Martha who are involved in a fight for their lives. This is a thoroughly enjoyable action packed story - move over Clive Cussler, there’s a new king in town.

The story was engaging enough but the narrator along with the recorded characters made it hard to listen to. It’s like the narrator had a speech impediment that he was working through. Weird.

This writer is not yet a Brad Thor, but he did an excellent job on this book and I look forward to future Works.

What did you love best about The Old Man and the King?

The sheer believability of a nearly unbelievable story. C'mon... a 72 year old Korean War vet taking on a choreographed mob hit like Daniel Craig? No one will buy this... Right? Wrong! The writer and narrator have combined to make the whole thing plausible,,, wait, no... actually believable. I loved it. Hey Geritol... we found you a new spokesperson.

The ultimate triumph of good over evil. No... that's too corny! But you do start rooting for the good guys right from the very first page of the book... and what takes place is not as "far fetched" as it might have been ten years ago. It mirrors much of the aggression and politically motivated terrorism that we unfortunately see on the TV news.

For my buck this is his best work of all that I've heard thus far. Accents and characters galore... fast-paced. Joe Corso and Al Benelli are a great team. They seem to play off each other extremely well. I've listened to "Lafitte's Treasure" and "Starlight Club". This is the 3rd of their collaborations I've bought. Although I've enjoyed them all, this is the best of the three in my opinion.

I don't want to give away the ending but when Lom's lady friend Martha is reunited with her children was an especially touching and romantic moment.

This would make a great movie or "Made for TV" cable special. Senior citizens "rock".

Listening to this audiobook I thought the narrator was excellent and I very quickly found myself drawn into the plot by the author’s fantastic scene setting, and its engaging characters. I especially liked the brilliant and surprising character of the old man Lom (Who is no ordinary old man), and Toby, Charlie and Martha who are involved in a fight for their lives.

This is a thoroughly enjoyable audiobook!