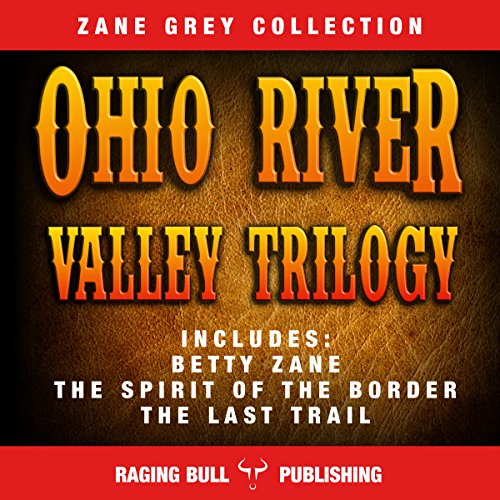 Inspired by the life and adventures of his own great-great grandmother, Betty Zane was Zane Grey's first novel and launched his career as a master writer of rousing frontier and Western adventures.

Betty Zane is the story of the events culminating in the last battle of the American Revolution, when 200 Redcoats from British-controlled Detroit along with 400 Shawnee Indian attacked the small, wood-palisaded Ford Henry on the western frontier. The heroine of the battle - a young, spunky, and beautiful frontier girl - was Betty Zane.

The Spirit of the Border

He was known as Deathwind to the Ohio Valley Indians, and now Lewis Wetzel must single-handedly save Fort Henry. Armed only with his long rifle and knife, he heads out on a one-man rampage to stop the bloody border wars, to face down Chief Wingenund and to avenge the brutal missionary massacre at Village of Peace.

A woman is kidnapped from Fort Henry by a band of renegades and hostile Ohio Valley Indians. Now, Lewis Wetzel and Jonathan Zane take pursuit. With no hope of survival, they follow the trail into the unknown wilderness, vowing it to be their last venture. At trail's end, they will face their bloodiest battle.

What listeners say about The Ohio River Valley Trilogy

When the frontier wasn’t so far west...

My new favorite Zane Grey novel. I’m passionate about early American frontier history and to find out that Grey wrote a whole trilogy of westerns when the “West” was only as far as the Ohio Valley excited me. The setting ended up as just one part of my enjoyment however. This book was filled with interesting characters, events, and a richness of prose that I’ve come to enjoy in all of Grey’s works. Betty was such a great character and her role in the Siege of the fort was almost too amazing to be true. Her romance with Clark was one of best I’ve seen in Grey’s books so far as well. It’s “old fashioned” compared to today, yet there’s a genuine feel to the characters that’s often missing in many love stories on the page and screen. The fact that this was his debut novel makes this all the more impressive, and based on his real life ancestors no less. Written in 1903 I’m just about as far removed from the publishing of this novel as he was from the actual events surrounding Betty Zane and the Siege of Fort Henry. Amazing how far the world has come since the 1780’s, the early 1900’s and now the 2020’s. It’s a great time capsule for both the era in which it’s set and the era which it was written.

I’ll admit I was a bit disappointed that in book two of the so called “Betty Zane Trilogy” Betty gets two scenes, one in which she speaks. It should be called the Wetzel trilogy since this story features him even more so than the first story. Overall I still enjoyed this tale though. The Christians “civilizing” the “poor savages” left a bad taste in my mouth honestly, but beyond that the love story of the aspiring frontiersman and his Indian wife was good and surprisingly tragic. Jim Girty was an excellent villain as well. I think Grey took some creative license with Simon Girty and Alexander Mckee however. Their ties to the indian nations of the Old Northwest in the actual history were more complex than depicted here. They didn’t join the Indians because they were evil souls or simply dishonorable traitors, they genuinely supported these nations in their resistance to American expansion. Certainly enemies of the US, but only from our point of view.

Diminishing returns with this trilogy. Book one was great for the focus on Betty and the unique feel of the setting and the period. By The Last Trail most of what made the previous book, and the first one especially, so appealing was lost. It focused on the supporting characters of Wetzel and Jonathan Zane in a more generic tale. It felt like Grey wasn’t pulling from history as he did for the other installments which disappointed me a bit.

This trilogy took place only miles from my home! Fantastically detailed and expressively narrated, I couldn’t have enjoyed it more.

One of Grey's Best

Wonderful stories about the west. Well narrated by J Rodney Turner. Well worth the credit.