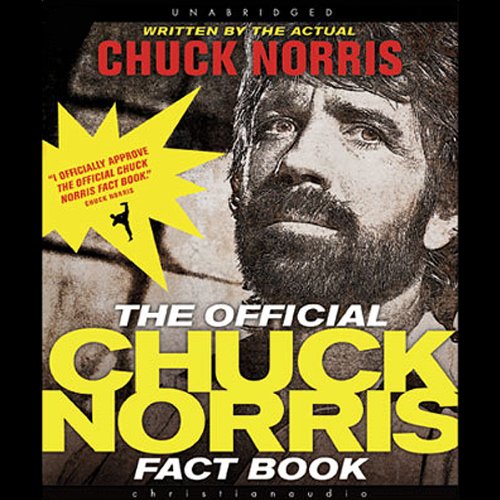 By: Chuck Norris
Narrated by: Johnny Heller
Try for $0.00

Hundreds of thousands of humorous Chuck Norris facts have been published, traveled around the globe via internet, and gained an international audience of millions. "Chuck Norris facts" is a quirky, but extremely popular internet phenomenon that has entertained fans from all over the globe. In the last several years, he has been asked repeatedly, from the heartland of America to the battlefields of Iraq and Afghanistan, "Which facts are your favorites?"

For the first time ever, in The Official Chuck Norris Fact Book, Chuck gives his readers not only his favorite "facts", roundhouse kicked by the man himself, but also the stories behind those facts and the code by which Chuck lives his life. Fans from every corner of the globe will enjoy both the fanciful and inspirational from one of the world's greatest action heroes - a hero who doesn't sleep...only waits.

What listeners say about The Official Chuck Norris Fact Book

I was hoping for something that would be fun and entertaining with some light-hearted wisdom from a TV and movie hero. What I found was a surprisingly good collection of short stories that presented Chuck Norris as a humble, kind and reverent soul. Of course he's not Ernest Hemmingway nor is he Billy Graham, but he's interesting and enjoyable. Great advice for anyone, but especially for those who care about this country and how we can do our part to make it better.

Must read. Good for the martial arts enthusiast, Christian, or anyone

Loved the book! Inspirational read! Will get in book form to share with other people.

So funny and poignant.

I've listened and re-listened over and over again. The performance is great, although its a shame Chuck didnt read it himself, I'm sure his beard would help.... Chuck's recounts of events spurred on my his "facts" gives you an insight to his life and values. It's almost an autobiography of sorts. I've also got the actual physical book. It just makes me smile after a tough day. And what more could you want?