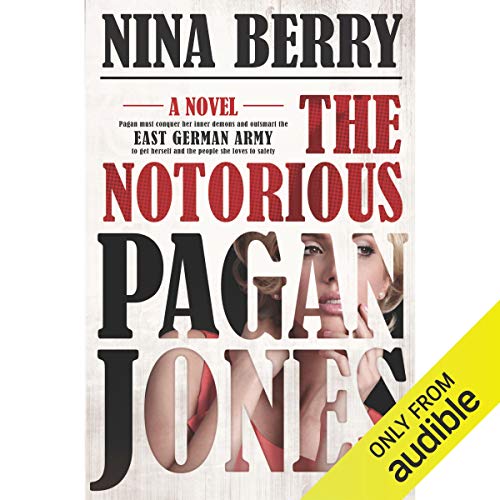 By: Nina Berry
Narrated by: Elizabeth Evans
Try for $0.00

Pagan Jones went from America's sweetheart to fallen angel in one fateful night in 1960: the night a car accident killed her whole family. Pagan was behind the wheel and driving drunk. Nine months later she's stuck in the Lighthouse Reformatory for Wayward Girls and tortured by her guilt - not to mention the sadistic Miss Edwards, who takes special delight in humiliating the once-great Pagan Jones. But all of that is about to change.

Pagan's old agent shows up with a mysterious studio executive, Devin Black, and an offer. Pagan will be released from juvenile detention if she accepts a juicy role in a comedy directed by award-winning director Bennie Wexler. The shoot starts in West Berlin in just three days. If Pagan's going to do it, she has to decide fast - and she has to agree to a court-appointed "guardian", the handsome yet infuriating Devin, who's too young, too smooth, too sophisticated to be some studio flack. The offer's too good to be true, Berlin's in turmoil, and Devin Black knows way too much about her - there's definitely something fishy going on. But if anyone can take on a divided city, a scheming guardian, and the criticism of a world that once adored her, it's the notorious Pagan Jones. What could go wrong?

What listeners say about The Notorious Pagan Jones

The Notorious Pagan Jones was absolutely delightful! I don't know what I liked the most: Miss Jones' sarcastic drawl, the slang, the various accents brought to life by a skillful narrator, or the cloak and dagger circumstances which led to the building of Berlin wall


Pagan Jones is a talented Hollywood starlet whose name was tarnished by a huge scandal. On her sixteenth birthday she got roaring drunk and drove her car off the cliff taking life of her father and younger sister. Now she is spending her days at a reform school dreaming of escape until Universal Studios representative puts an irresistible offer on the table: Pagan agrees to replace an actress in a comedy which starts filming in three days in West Berlin, and she will be released on parole under the supervision of the court appointed guardian.

This is Pagan's chance to come back, but she is paranoid and suspicious of her so-called guardian. Mysterious, suave Devin Black is barely twenty himself, and he has a hidden agenda.

Not only Pagan is delightfully quick witted, gifted as an actress and sarcastic as hell, she has a taste for danger, which in the atmosphere of conspiracies, spies and old secrets serves her well. Instead of a pawn in men's games, she becomes a lead player and saves the day with fantastic flourish.


At the same time, Pagan doesn't feel like a cartoonish character. She is afraid and under an enormous amount of pressure to perform. She is a recovering alcoholic and suffers from flashbacks to her crash. She has ups and downs, and feels very real.

Secondary characters of Devin Black, Thomas and even Nicky Raven (Pagan's ex-flame) are multidimensional and only add to the rich flavour of this story.


Overall, I was enormously entertained and am looking forward to more books from Nina Berry. Recommended to all the fans of Ally Carter.

Would you listen to The Notorious Pagan Jones again? Why?

Probably not; I don't often repeat a book I have listened to already unless I have forgotten something.

I appreciated how well-crafted the story was. It was written for a much younger audience but was enjoyable for an older mystery lover that enjoys historical fiction and has a penchant for all things "Old Hollywood". I also enjoyed the historical context and lessons.

She was okay; she did not make or break the experience for me.

I have a short attention span so I am rarely able to sit and do anything in one sitting.

I enjoyed all the twists and turns of the plot and how the were woven in with the backdrop of the Berlin Wall. The story is well-written and thoroughly enjoyable.