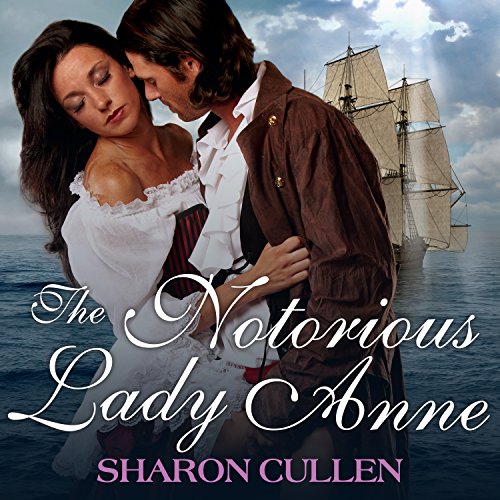 By: Sharon Cullen
Narrated by: Veida Dehmlow
Try for $0.00

Nicholas Addison, celebrated captain of the Blackwell Shipping Fleet, has agreed to take Mrs. Emmaline Sutherland aboard the Pride and ferry the raven-haired beauty across the Atlantic on what he imagines will be a routine trip. But when the ship is attacked by pirates, the seemingly innocent passenger is revealed to be none other than the infamous marauder Lady Anne, whose name strikes fear in the hearts of sailors everywhere - and whose seductive wiles commandeer Nicholas's affections.

Lady Anne, a legend of the high seas, has spent the last 11 years plotting revenge against her father, the owner of Blackwell Shipping. She has targeted the Pride in hopes of plundering its captain's company secrets. But beneath her fierce courage and bitter determination, Anne has the delicate heart of a woman - a heart that cannot help falling for Nicholas. Now Anne must make a difficult choice: bring down Blackwell or surrender to love. Contains mature themes.

"If you're a fan of Johanna Lindsey you won't want to miss this book." ---USA Today

What listeners say about The Notorious Lady Anne

Oh, I liked this!

Yes, its a pirate story but not with your usual pirates and not the usual story. I'm not going to go into the plot but it was a good one. It kept me interested the whole way. Emmaline is fantastic! A strong female character and that's always good to see. Nicholas is delightful! Their relationship develops well and their dialogue is witty and fun. The narration was first-rate. This was wonderful. I'm so sorry that the subsequent books aren't available on audio yet.

Love, love, loved this book. A little bit of angst and a little bit of misunderstandings and it was all good. So, let me suggest you ignore the 3 one and two star reviews and read the 50 higher reviews.
Loved Nicholas and Emmaline, their sexual tension and the remarkable sex. Loved the storyline and, really, there's not enough lady pirate books.
Loved the secondary characters: Phin, Shamus, Sebastian and Clair. Really hated Peter and Alphonse. Really, really hated Blackwell.
It was an entertaining book and I will definitely be reading this author again.

As to the narrator: Since she has a rather low voice to begin with she does alright with most of the men's voices. She did sound kinda' girly when it came to Peter but that was ok because he was a creep anyway and the priest was girly too but he wasn't in it that much so it was alright.

Great Story, Not so good narration.

Wow I loved this story. Great characters Emmaline and Nicholas are. She is a very strong butt kicking pirate. Loved her. Always wearing breeches and in her bare feet. LOL He is handsome, suave, and just awesome. They had some great chemistry together, a few very nicely written sex scenes.

Lots of of great dialogue throughout the entire book. I like lots of dialogue in the books I read. The story line, plot and writing flowed very nicely together. Wonderful story!

A very enjoyable READ for sure, because the narrator made them sound old. I got to 8 percent in whispersync and had to stop listening because the story was good but the narrator was not. So at 8 percent I quit listening and just read this book. I am not a Veida Dehmlow fan at all. Sorry VD but you need to not make your characters sound old it was ruining this story.