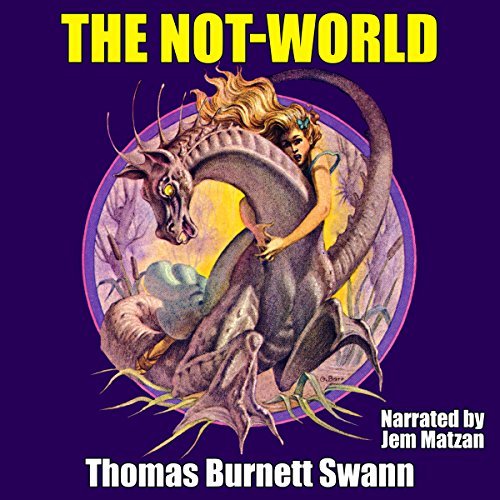 By: Thomas Burnett Swann
Narrated by: Jem Matzan
Try for $0.00

Thomas Burnett Swann was a brilliant fantasy writer who died in 1976. He wrote primarily about the ancient Greek and Roman world, blending myth with romance and adventure. A reviewer in the Village Voice sums his work up well: "Swann's neo-romantic fantasies of the past are unique. He uses the stuff of myth but with twists and inventions of his own."

The Not-World: One would not have expected to find the last hideout of the ancient weird folk of legend and prehistory in an English forest of two centuries ago - and yet in that land which has always been haunted by the lore of little folk there had to be some truth behind such universal belief.

The magic pen of Thomas Burnett Swann, master of fantasy and chronicler of the pre-humans, has produced in The Not-World one of his finest - and most piquant - novels.

Here is the story of Dylan and Deirdre, of Thomas Chatterton - and of the balloon flight that brought them into an older and more enchanted land to mingle their fates with those of Arachne and the Night Mares in whom a rising industrial materialism could no longer believe.

What listeners say about The Not-World

The Not-World is a romantic fairytale type of story. The story itself was good, but a bit predictable. I do love the mythical creatures Swann uses in this story. What I enjoyed the most was the narration. The reason I chose this book was for it's narrator. Jem Matzan doesn't just read the story, he acts it out! He does an amazing job with each and every character. He is very versatile with his accents with both male and female characters. If you enjoy old classic fantasy books, you'll love listening to this!

A well-narrated but slightly-vintaged adventure

Jem Matzan did a fantastic reading of The Not-World and was the reason I agreed to listen to the book based on the preview. The tones were clear, the voices distinct and the animation of story telling was entertaining. Whatever issues I took with the book itself, it was always a joy to listen to with one exception: I personally dislike the editing choice of stacking layers of the reader's audio tracks to convey multiple people speaking/singing at once. Just read the words, we use our imagination for the rest of the book, we can handle imagining more than one voice at once.

While the story arc of the plot was fairly predictable (and let's be honest, most books do follow some classic formulas) the details within the plot points were unique enough to keep my interest. I liked that the heroine wasn't a spunky 16 year old with perfect hair; she was an adult with some physical problems. To compliment this, the hero wasn't a brooding underwear model in his 20s either. Dylan was certainly a tad self depreciating at times, but it never came across as darkly emotional about it.

There were a few unexpected (dare I say "ridiculous"?)scenes that I'm sure various listeners/readers will react to differently. I can think of a very specific instance where I know I had "wtf" written all over my face while listening, but I can just as easily see someone laughing their head off in response.

--I received a copy of this audiobook in exchange for an honest review.--

I thoroughly enjoyed this tale! Jem Matzen does a fantastic job narrating!Deirdre is a 30 something spinster w/continual pain and is a successful author.Dylan is a 'grunt' who while looking for a real job is driving a 'chaise'(?) Deirdre needs someone to transport her and Dylan fits the bill.While getting to know him they go on an adventure and end up in 'The not-world',a place Dylan knows and doesn't want to be.I won't give the whole story away.I will be looking for more from this author!
"This audiobook was provided by the author, narrator, or publisher at no cost in exchange for an unbiased review courtesy of Audiobook Blast."

This was a book I had some hesitation going into. I recently started liking fantasy- but nothing quite so 'fantasy', if that makes any sense! I ended up liking this story- though I feel like 'Auntie' got made fun of just a bit too much. But it was funny. It was also very full of adventure, oddities and a bit of romance. If you're a big fantasy fan, I'd recommend it.

I received a free copy of this audiobook from the author, publisher or narrator in exchange for an unbiased review.

Another reviewer has given a good summary of the story points, and anyone familiar with this type and era of fantasy will certainly be able to predict key elements. I showed the cover to a co-worker and he ran through the descriptive cast of characters, salient plot devices, the choreography of the story arc and so on, but said he had not read it and didn't know it himself. If you do know this sector of our literary abundance from the latter part of the 20th century, then the story can speak for itself. It is well written, no doubts there.

In keeping with the style of writing by Swann, Jen Matzan reads The Not-World like a Herald proclaiming the news/ story of the hero and heroine.

In my own mind's eye, I could have been sitting in the dim light of a camp fire, listening with the others, huddled together to keep the forbidding Forest at bay. Matzen's delivery was well "acted", he really gave the story life with a sense of both urgency and time-lessness in his paced reading. Within the first chapter or two, I was not listening to a mere reader, I was hearing the voices of the individual people and creatures.

The main thing affecting my enjoyment was that this genre just isn't my style of fantasy, though I had liked it better for the narration than for the story alone.
.

If you could sum up The Not-World in three words, what would they be?

The style it's written in.

Would you listen to another book narrated by Jem Matzan?

I would if I was interested in the story but I wouldn't get something purely to hear his performance of it.

I wouldn't go that far but it's a fun story.

The Not-World by Thomas Burnett Swan is a wistful, dreamlike, fairytale; with a smidgen of alternate history. Originally published in 1975 this story is that rare beast, seldom seen in this era, a standalone fantasy novel. It's also much shorter than most modern novels with an unabridged audio book coming in under six hours.

The story takes place near Bristol sometime in the reign of George III; so between 1760 to 1820. A lady named Deirdre has hired an unemployed sailor named Dylan to drive her to meet her aunt. On the way there they are forced to stop in a mysterious forest that the sailor calls The-Not-World. In the wood they meet a boy named Tommy and later go their own ways. A bit later Deirdre receives a letter from the boy Tommy and reunites with Dylan, this time with her fat Aunty in tow.

What follows after that is a more risqué adventure than I was expecting. Dylan's fat shaming the Aunty at every turn aside, this story is loads of fun if it doesn't really impart any deep meaning in and of itself. I would never spoil a story for you but I personally found the climax of the story so unexpected and outrageous I was almost toppled out of my chair from the shock of it.

I'd say it's the haunting style of the writing itself that lingers in your mind, and makes this story a memorable and worthwhile read.

This bit applies only to the audible audiobook version of the book available at Audible.com; and narrated by Jem Matzan.

I found Jem Matzan's performance to be good but a tad inconsistent. His voice sometimes sounds a bit strained in early parts of the book and his inflection sometimes seems to be off to me. Not horrible by any means but not close to my favorite voice.

The one thing that I did really dislike was the singing parts where all of the people singing in their voices have been stacked on top of each other. I get that it's supposed to be out of key and unsynchronised but I really didn't enjoy that at all; and I couldn’t understand any of the song because of the horrid mash up of sound. For myself I would have much preferred this simply to be read out loud and stated; not acted out.

Dated, goofy, politically incorrect fantasy... absolutely adorable, though. The narration is good, but the sound effects are lame.