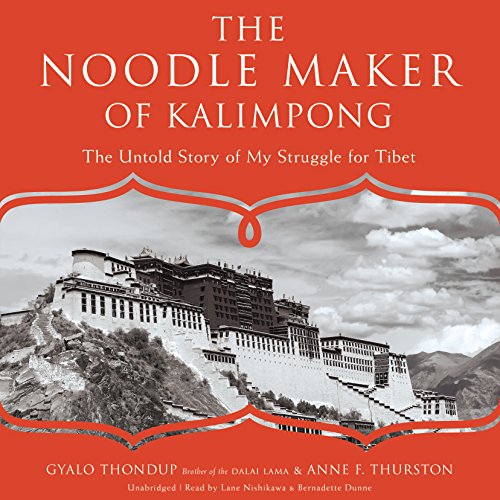 The Noodle Maker of Kalimpong

In December 2010 residents of Kalimpong, a town on the Indian border with Tibet, turned out en masse to welcome the Dalai Lama. It was only then they realized for the first time that the neighbor they knew as the noodle maker of Kalimpong was also the Dalai Lama's older brother. The Tibetan spiritual leader had come to visit the Gaden Tharpa Choling monastery and join his brother for lunch in the family compound.

Gyalo Thondup has long lived out of the spotlight and hidden from view, but his whole life has been dedicated to the cause of his younger brother and Tibet. He served for decades as the Dalai Lama's special envoy, the trusted interlocutor between Tibet and foreign leaders from Chiang Kai-shek to Jawaharlal Nehru, Zhou Enlai to Deng Xiaoping. Traveling the globe and meeting behind closed doors, Thondup has been an important witness to some of the epochal events of the 20th century. No one has a better grasp of the ongoing great game as the divergent interests of China, India, Russia, and the United States continue to play themselves out over the Tibetan plateau. Only the Dalai Lama himself has played a more important role in the political history of modern, tragedy-ridden Tibet. Indeed, the Dalai Lama's dramatic escape from Lhasa to exile in India would not have been possible without his brother's behind-the-scenes help.

Now, together with Anne F. Thurston, who cowrote the international best seller The Private Life of Chairman Mao, Gyalo Thondup is finally telling his story.

The settings are exotic - the Tibetan province of Amdo, where the two brothers spent their early childhood; Tibet's legendary capital of Lhasa; Nanjing, where Thondup received a Chinese education; Taiwan, where he fled when he could not return to Tibet; Calcutta, Delhi, and the Himalayan hill towns of India, where he finally made his home....

What listeners say about The Noodle Maker of Kalimpong

I think all of Dalai Lama's brothers are interesting, though not always for good reasons. Gyalo Thondup in particular is a fascinating character because of his role in more than half a century when Tibet was in complete turmoil. I think he wrote this to the best of his memory and it gives the reader a good picture of Tibet recent history through the lens of Gyalo Thondup.

This was a terrific and informative story, and the framing by the writer who was hired by Gyalo Thondup was thought-provoking. The female narrator was good. The male narrator was very frustrating. He hardly knew how to pronounce the Tibetan names, and “Takster” and “Rinpoche” in particular were forcibly and awkwardly pronounced the entire time, which broke into the experience of the story because the narrator In a first person story would have pronounced these words as naturally as breathing. Instead, they were laboriously pronounced, and it really interrupted the story. I almost didn’t keep listening because it bugged me so much, but I managed to get past it and enjoy the rest. It’s well worth reading, but I do wish they paid more attention to the narrator.

Good narrator. Fascinating story. Well written. I thoroughly enjoyed listening to it and couldn't wait to go on my walk again so I could continue.

This book is very important if you want to learn more about the history of the Tibetan conflict with China. The names of the people are complex and not easy to keep track of for this American reader but the political timeline and perspective of the writer, who is the older brother of His Holiness, is important to understand.