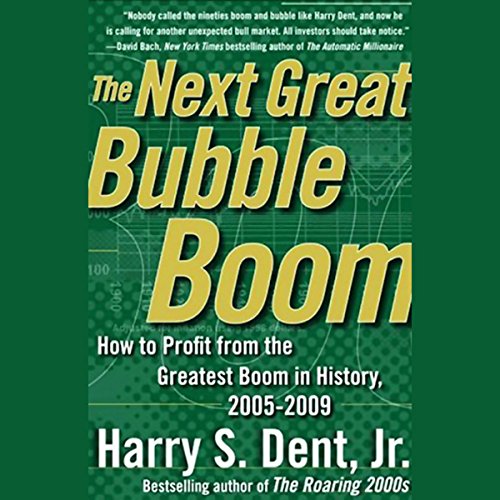 For over 15 years, New York Times best-selling author Harry S. Dent, Jr. has been uncannily accurate in predicting the financial future. In his three previous works, Dent predicted the financial recession of the early 90s, the economic expansion of the mid-90s, and the financial free-for-all of 1998-2000.

The Next Great Bubble Boom offers a comprehensive forecast for the next two decades, showing new models for predicting the future behavior of the economy, inflation, large and small cap stocks, bonds, key sectors, and more. Dent gives advice on everything from investment strategies to real estate cycles, and shows not only how bright our future will be, but how best to profit from it.

Dent gives us something to look forward to, including:

In The Next Bubble Boom, Dent reveals how the economic growth of the late 1990s was a prelude to the great boom around the corner and how all of us can reap its benefits.

PLEASE NOTE: When you purchase this title, the accompanying reference material will be available in your My Library section along with the audio.
©2004 Harry S. Dent, Jr. (P)2004 Simon & Schuster Inc. SOUND IDEAS is an imprint of Simon & Schuster Audio Division, Simon & Schuster, Inc.

this book is very technical and difficult to listen to. The ideas and the reasoning is ok, but everything is based on analysis of past events and the assumption that booms and busts will happen under the same circumstances, and in the same way as they did 200 years ago. The author claims that booms and busts can be predicted and will happen acording to a specified timeplan, almost like the movement of the stars. The weakest point in this book is that it doesn?t consider other factors such as international trade, trends, public opinion, war, terrorism etc. Maybe he?s right and these factors will have no notable influence on the global economic situation. We wil know in year 2012.

I was hoping for some insight, but if you listened to the first 2 or 3 minutes you pretty much get the jist of the book. The book makes the comparison between the the stock market crash of 1918-1921 to the crash of 2000-2002. It then says that like the 1922-1929 boom there will be another boom from 2005 to 2008 after which there will be a major crash. The book then goes on to repeat this message another 50 times. I was pretty much sick of this book after an hour and a half. If this boom-bust cycle had happened a bit more often in the past I might be inclined to believe the trend, however drawing the conclusions that he does from only one example in the past makes a very weak case for a coming boom...where suppossedly the DOW will hit 40,000 in the next 4-5 years.

This book opened my eyes (ears) to a new economic perspective. It is a fascinating listen with logic and reason different than I have typically heard. It's worth the three hours.

One star almost removed from outstanding because...I think I will buy the book now as it often refers to graphs and charts that were not included with the audio download. It interests me enough to want the book for reference and more detail.

The author speaks about the demographics as if nothing elese matters in the valuation of the stock market. Inflation, terrorism, war, dollar depreciation, mass phychology are not discussed almost at all. Verry little philosophical outlook on the future, all analisys is based on the charts of financial markets of the past.
I believe that the financial markets reflect historical and sociopolitical trends. The book does not touch on that...

May be worth trying if you really like "Techincal analisys"

I make my living in the enterprise high-tech sector. I know little about finance. The author's opinion for the most part are presented logically and I for one will factor them into my medium and long-term financial planning, including his comments on real estate. Do yourself a favor and be sure to download the accompanying booklet (with graphs) first!

Precision is a bit much

Dent claims to be able to tell the future based on some long term trends. He claims a bit too much. The future is neither a linear reflection of the past nor as exact as he would like. However, if you ignore the hype - there are some very interesting speculations on a number of economic trends.

I found it informative, well researched and eye opening, it's changed my view of investing and now i want to do more research to confirm some of the comments, i highly recommend as i think it's relevant and timely since i am one of the baby boomers however I'm at the tail end so it may be worse for me.