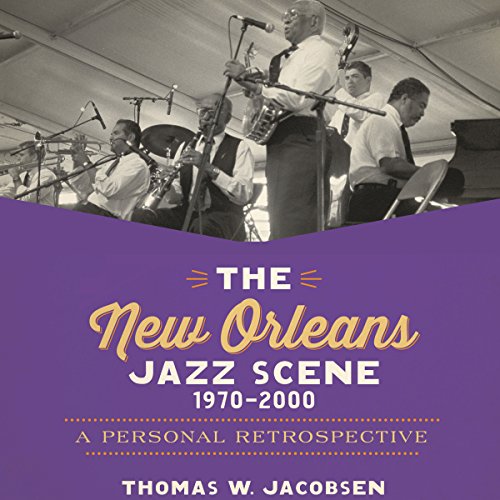 In 1966, journalist Charles Suhor wrote that New Orleans jazz was "ready for its new Golden Age". Thomas W. Jacobsen's The New Orleans Jazz Scene, 1970-2000 chronicles the resurgence of jazz music in the Crescent City in the years following Suhor's prophetic claim. Jacobsen, a New Orleans resident and longtime jazz aficionado, offers a wide-ranging history of the New Orleans jazz renaissance in the last three decades of the twentieth century, weaving local musical developments into the larger context of the national jazz scene.

Jacobsen vividly evokes the changing face of the New Orleans jazz world at the close of the twentieth century. Drawing from an array of personal experiences and his own exhaustive research, he discusses leading musicians and bands, both traditionalists and modernists, as well as major performance venues and festivals. The city's musical infrastructure does not go overlooked, as Jacobsen delves into New Orleans's music business, its jazz media, and the evolution of jazz education at public schools and universities. The New Orleans Jazz Scene, 1970-2000 offers a vibrant and fascinating portrait of the musical genre that defines New Orleans.