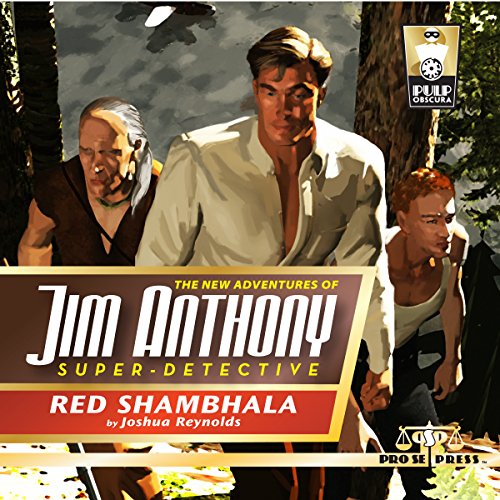 By: Joshua Reynolds
Narrated by: Bob Kern
Try for $0.00

From out of the past, the Super-Detective Returns! Pro Se Productions in conjunction with Altus Press presents a new volume in its Pulp Obscura line!

Originally written under the pen name of John Grange by Victor Rousseau Emmanuel, Robert Leslie Bellem, and W. T. Ballard, Jim Anthony was a "half Irish, half Indian, and all-American" adventurer who inherited great wealth and had amazing mental and physical abilities. And now, he returns in a new adventure penned by noted author Joshua Reynolds!

A decades-old vendetta.... A man thought long dead who might be seeking revenge.... Two monstrous eagles at his beck and call.... Men haunting rooftops, the skin ripped from their flesh.... Rumors of stolen gold buried beneath the earth in a boxcar...and a villain so bold that he takes Jim Anthony's headquarters hostage! All this and more in Red Shambhala, by Joshua Reynolds from Pro Se Productions and Pulp Obscura!

Not just a Doc Savage clone...

So this is the last Jim Anthony audiobook... Well, almost. I found seven dedicated to him, plus a short story scattered here and there, but there's at least one cross-over novel featuring him which I've been working up to... First though, even though Jim Anthony is described as being a clone of Doc Savage - and there are certainly similarities - I think he stands on his own. Much as I like Doc, Jim Anthony comes across as more human. We know he's gonna win, but he has to put up more of a fight, and he won't be unscathed... Plus, he has weaknesses...but they're more than made up for by his friends and allies. Actually, I noticed one weakness that got kind of old to me after hearing it described in story after story with virtually the same outcome in every case: he spots a bad guy in a crowded public place with lots of civilians, and he's so worked up by the crimes that they've had a hand in that he makes a flamboyant, yet futile atempt to catch them single-handed, with liberal use of his famous belt, and often a highly destructive vehicular chase, only to end up with them dead or escaped, and frequently at the cost of colateral damage... He's supposed to be really intelligent, so one would think he'd grow out of this tendancy, and instead, make a stealthy approach and capture, or at least alert the police... Oh well... He's not perfect. That actually brings up another point: these stories tend to wander throughout his career timeline, so depending on when a story is set, you never know which version of Jim Anthony you might be reading about. In spite of that, I'm eager for more, and the original adventures of Jim Anthony as well. And the narration is the usual mix of enjoyable frustration...