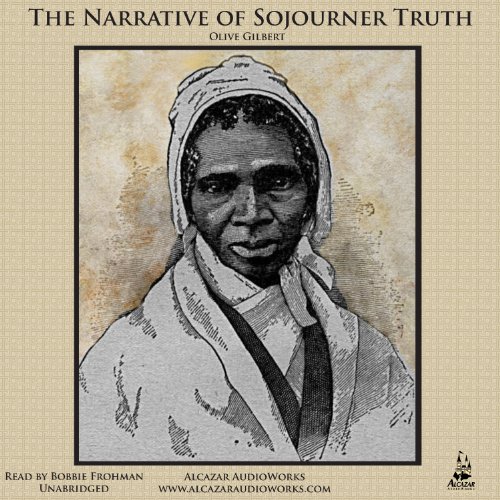 The Narrative of Sojourner Truth

By: Olive Gilbert
Narrated by: Bobbie Frohman
Try for $0.00

A poignant biography as told to Olive Gilbert by Isabella Bomefree-a slave (1797-1883) who later took the name of Sojourner Truth. She recounts the harshness of life under slavery and after winning her freedom, became a vociferous abolitionist for which she has been long remembered and revered.

Chapter 01: Her Birth And Parentage

Chapter 03: Her Brothers And Sisters

Chapter 11: Her Standing With Her New Master And Mistress

Chapter 13: Isabella As A Mother

Chapter 16: Illegal Sale Of Her Son

Chapter 17: It Is Often Darkest Just Before Dawn

Chapter 21: Finding A Brother And Sister

Chapter 25: The Cause Of Her Leaving The City

Chapter 26: The Consequences Of Refusing A Traveler A Night's Lodging

Chapter 27: Some Of Her Views And Reasonings

Chapter 30: Last Interview With Her Master

Olive Gilbert (1801-1884) was an abolitionist who deeply felt the plight of slaves and spent over two years living with the emancipated slave and preacher, Sojourner Truth, carefully recording her story.

What listeners say about The Narrative of Sojourner Truth

I really enjoyed learning about Isabella. This book talked about a great story of a slave women who trusted God. It was a little broken up in how the story was told chronologically but once I realized what was going on it made sense.

To subjectively review a history experienced by another is baseless. All one may do is accept it, understand it, appreciate it and maybe empathize.

Interesting, but tedious at times

At times this was very interesting, but at other times it was too tedious, with too many uninteresting details. I did have to be persistent to finish this book, especially in chapter 3. However I am glad I listened to the end because the most memorable part was near the end of chapter 3!

My kind of girl.

loved this book this is my second time reading it, my favorite part is when she stood up to the bullies.

What was most disappointing about Olive Gilbert’s story?

The narrator voice was for me boring and not exciting. The story was all over the place, to confusing

It was just okay. There are many other books written about Sojourner. I wonder what the similarities are.

I didn't like it. It didn't sound like any narrative I've ever seen on tv or any that I've ever read. Just my opinion.