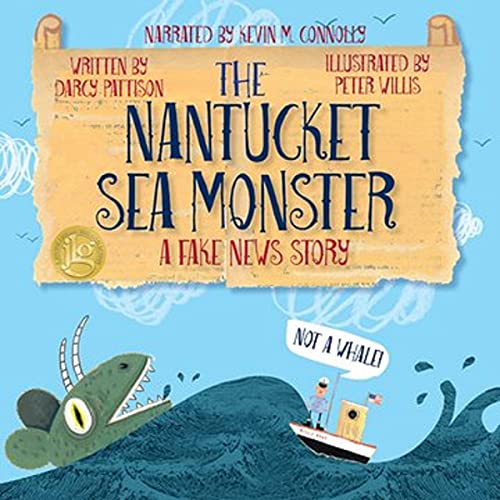 By: Darcy Pattison
Narrated by: Kevin M. Connolly
Try for $0.00

Do you believe everything you read in the newspaper?

Early in August 1937, a news flash came: A sea monster had been spotted lurking off the shore of Nantucket Island. Historically, the Massachusetts island had served as port for whaling ships. Eyewitnesses swore this wasn’t a whale, but some new, fearsome creature. As eyewitness account piled up, newspaper stories of the sea monster spread quickly. Across the nation, people shivered in fear.

Then, footprints were found on a Nantucket beach. Photographs were sent to prominent biologists for their opinion. Discussion swirled about raising a hunting party.

On August 18, news spread across the island: the sea monster had been captured. Islanders ran to the beach and couldn’t believe their eyes.

This nonfiction book is a perfect tool to discuss non-political fake news stories.

Quotes from Thomas Jefferson make it clear that fake news has always been one of the costs of a free press. A timeline lists actual events in the order they occurred. A vocabulary list defines relevant words.

What listeners say about The Nantucket Sea Monster