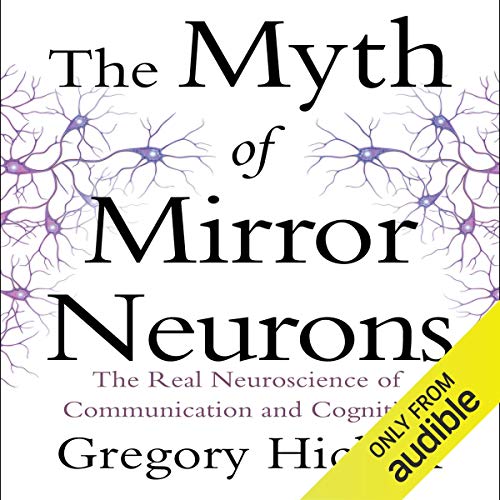 The Myth of Mirror Neurons

By: Gregory Hickok
Narrated by: Eric Jason Martin
Try for $0.00

An essential reconsideration of one of the most far-reaching theories in modern neuroscience and psychology.

In 1992, a group of neuroscientists from Parma, Italy, reported a new class of brain cells discovered in the motor cortex of the macaque monkey. These cells, later dubbed mirror neurons, responded equally well during the monkey's own motor actions, such as grabbing an object, and while the monkey watched someone else perform similar motor actions. Researchers speculated that the neurons allowed the monkey to understand others by simulating their actions in its own brain.

Mirror neurons soon jumped species and took human neuroscience and psychology by storm. In the late 1990s theorists showed how the cells provided an elegantly simple new way to explain the evolution of language, the development of human empathy, and the neural foundation of autism. In the years that followed, a stream of scientific studies implicated mirror neurons in everything from schizophrenia and drug abuse to sexual orientation and contagious yawning.

In The Myth of Mirror Neurons, neuroscientist Gregory Hickok reexamines the mirror neuron story and finds that it is built on a tenuous foundation - a pair of codependent assumptions about mirror neuron activity and human understanding. Drawing on a broad range of observations from work on animal behavior, modern neuroimaging, neurological disorders, and more, Hickok argues that the foundational assumptions fall flat in light of the facts. He then explores alternative explanations of mirror neuron function while illuminating crucial questions about human cognition and brain function: Why do humans imitate so prodigiously? How different are the left and right hemispheres of the brain? Why do we have two visual systems? Do we need to be able to talk to understand speech? What's going wrong in autism? Can humans read minds?

The Myth of Mirror Neurons not only delivers an instructive tale about the course of scientific progress - from discovery to theory to revision - but also provides deep insights into the organization and function of the human brain and the nature of communication and cognition.

What listeners say about The Myth of Mirror Neurons

Something to offend all mirror neuronscientist

You get two things with this book. You get an incredible interesting exposition on the workings of the mind (consciousness) and a narrative that ties that story together by showing how mirror neurons almost certainly aren't what you thought they were.

The author does not reject the existence of mirror neurons in humans, but he does poke holes in most of what you probably have been told about them in a host of other books and articles. He gives very nuanced arguments to how the available data doesn't always mean what mirror neuron experts say they do. The author is an expert in the understanding of how we communicate. He'll delve into the "motor theory of speech" and how that deservedly fell out of disrepute over time and was resurrected only because that gave mirror neurons such a central role. The results of various experiments supporting that hypothesis are not always best explained by the ways mirror neuron advocates claim and sometimes they ignore the better explanations.

This is a real strength of the book. While showing how better explanations for the experiments and data are available which don't excessively rely on mirror neurons the author never shies way from educating the listener on the embodied processes of thinking.

I love neuroscience and books about the workings of the mind and human behavior. While reading such books, mirror neurons kept popping up in sections of those books, but over time, I started to realize that the advocates for the magical workings of the mirror neurons did not always make sense and there seemed to be better explanations available. This book tells me why my caution radar was beeping.

I'm sure a lot of experts in the field probably hate this book, but I can recommend this book because it will teach the listener to be cautious about mirror neuron claims, and help the listener learn a little bit more about the way the brain works without overwhelming the listener with too many names of brain parts which I only end up forgetting.

Brilliant overview and analysis of the science and literature regarding the mirror neuron debate. I enjoyed very much.

One of my favorite listens of all time

It is a very well reasoned look at mirror neurons and the studies behind them presented in a clear way that an average person could understand.

The author presents a lot of evidence, pro and con, of various concepts of mirror neurons and does an excellent job of pointing out shortcomings in every study, often with suggestions of improved techniques that would lead to more clarity. He does not seem to be against these concepts, just concerned about divergence with what the studies actually show. I love his approach.

Hickok goes into a major digression on understanding speech, an area where he has done research. I found this area of the book even more fascinating than the parts that relate directly to mirror neurons.

The appendix guide of brain regions was a very welcome bonus for me too. I feel I got more than I paid for with these two "bonuses".

Beyond his cutting through the bunk of mirror neuron speculation, Hickok presents a wonderful meditation on how the neuroscience program works on a macro level by tracing through the development of this theory. Very instructive and pleasant listen. 10/10

Excellent overview of a very dense and viscous topic

Enjoyed listening to this book, though it was tough going in many spots.
Needs a fairly good science and specifically neuroscience background to comprehend to any degree of understanding.
Very thought provoking on the subject of Mirror Neurons that have become the master explanation for all things Brain. Puts the function and theory in its place leaving wide gaping holes that research will fill, hopefully.

I came into this knowing nothing about the subject matter so it was good from that perspective. author went on a wild ride of ideas that were good then disproven then reproven. book reader was very slow, I ended up playing it at 1.5 times normal speed and understood him just fine

excellent scientific review of the evidence

Excellent critical review of the available literature on mirror neurons (and how the data have been largely misinterpreted). The chapter on autism was fantastic.

I find no fault with the logic or science of this book. I'm not a neuroscientist or psychologist but have an interest in these topics. A lot of it would have been easier to follow in print whee I can easily reread sections. That said I think the author did an excellent job debunking mirror neurons and I have a general understanding of why after this.

The narrator ruins it

I was so excited to get into this book. Unfortunately, I found it almost impossible to listen to the slow, monotone drawl of the narrator. Ben Stein reading this would have been a 100% improvement.

This book beats the concept of mirror neurons being the root of so many behaviors that were attributed to them in recent decades well into the ground. Admittedly the continuous returning to that thesis after covering so much evidence for it was a little tiring. However, the side trips into related topics like autism were very interesting.

This is a pretty dry book, but unfortunately the reader made it exceptionally dry. I wish a different reader could have injected more enthusiasm into the topic.