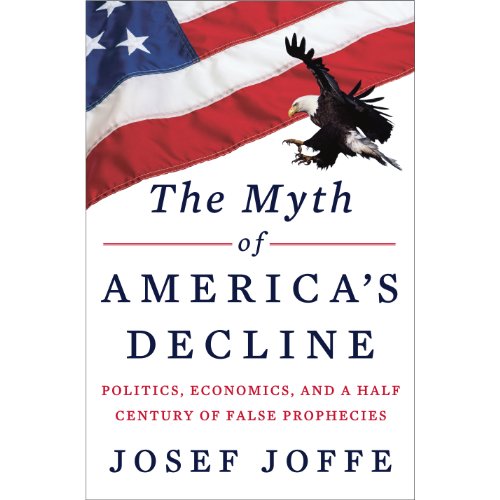 The Myth of America's Decline

Politics, Economics, and a Half Century of False Prophecies
By: Josef Joffe
Narrated by: Paul Christy
Length: 8 hrs and 57 mins
Categories: Nonfiction, Politics
4 out of 5 stars 4.2 (24 ratings)

The Myth of America's Decline

A provocative and contrarian work - filled with great lessons from history - that challenges the pervasive notion that America is on the decline.

Once every decade, it is "decline time" in America. In recent years, it has been the unstoppable rise of China that has spelled "finis America." What the Chinese juggernaut is today, the Soviet Union ("We shall bury you") was in the 1950s. The Vietnam decade of the 1960s was described as America’s "collective suicide attempt," while in the 1970s, the United States succumbed to Jimmy Carter’s famous "malaise," as the dollar dangerously plummeted. The 1980s unquestionably belonged to a resurgent Japan, the "Rising Sun," whereas in the 1990s, Europe shone forth as an "empire by example." In the naughts, it was "Asia Rising" that became the flavor of the decade.

Despite a litany of prognostications, these contenders have all fallen back, one by one. While it may be catnip for the media to play up America as a has-been, Josef Joffe, a leading German commentator and Stanford University academic, compellingly shows that declinism is not a cold-eyed diagnosis but a device in the style of the ancient prophets: "Thou shalt perish, unless…"

Gloom is a prophecy that must be believed so that it will turn out wrong. Joffe repeatedly demonstrates how the "economic miracles" that propelled the rising tide of challengers flounder against their own limits. Hardly confined to Europe alone, declinism has also been an especially nifty career builder for American politicians, among them Kennedy, Nixon, and Reagan, who all rode into the White House by hawking "the end is near."

Effortlessly mixing keen historical insights with brilliant diplomatic and economic analysis, The Myth of America's Decline becomes a remarkable reflection on our nation’s standing in the world and an eye-opening account that challenges the pervasive and now tired notion that America is on the decline.

America the beautiful, strong, and welcoming.

If you could sum up The Myth of America's Decline in three words, what would they be?

A must read (listen).

A must read for all college students, government officials, and those interested in America's greatness. This book will make you fall in love with America all over again.

What would have made The Myth of America's Decline better?

Author makes a good point about the robust nature of the American economy and its position in the world. However the first six chapters basically repeat the same information ad naseum. All could have been stated in one chapter.

What was most disappointing about Josef Joffe’s story?

He took far too long to present a fairly basic premise.