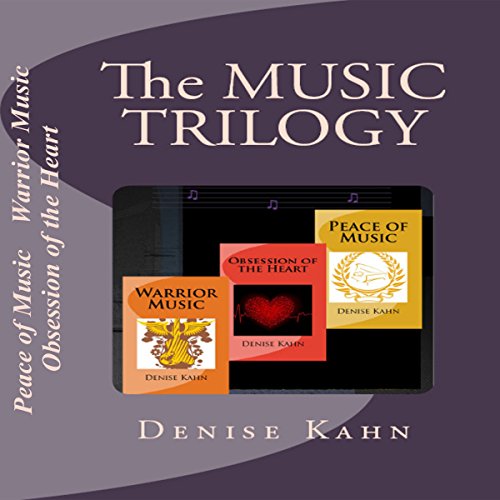 The Music Trilogy is a family saga, a compilation of: Peace of Music, Obsession of the Heart, and Warrior Music.

Peace of Music (Book 1): A once-lost magnificent antique vase from China's 13th-century Song Dynasty reappears from the depths of the Mediterranean Sea when it comes to dwell on a piano in a doctor's home. It becomes the impetus in steering the lives of this doctor and his descendants through their heartbreaks, romances, and, ultimately, successes. An assassination, a sabotage on a Greek island, and amazing musical performances are but some of the events that strike their lives. Spanning from 13th-century China to the present, the story takes place on four continents, with talented individuals of different nationalities and backgrounds, always interrelated by music.

Obsession of the Heart (Book 2): Set against an international backdrop of jet setters, music, romance, murder, terrorism, and true friendship is Davina Walters, an international singer. Davina meets Jean, a young woman almost paralyzed with fear, as her sadistic ex-husband is bent on killing her. On the spur of the moment, Davina decides to take her along on tour, and the murderer plans his ultimate revenge in a deadly showdown.

Warrior Music (Book 3): Max knew the drugs and alcohol would eventually kill him, and sooner rather than later. So he enlisted in the Marines. His timing is unfortunate, as the events of 9/11 find him at the beginning of his military service, and he is sent to Iraq. The journey he embarks on is unlike anything he could ever imagine. From Washington, Boston, and New Orleans to the ancient sands of Iraq, Max and his entourage endure the toils of war with courage, romance, patriotism, heartache, and passion. Only one weapon gets them through the anguish they come face to face with: music.

Warrior Music is a tribute to the author's son who served as a Marine, and to all Veterans.

What listeners say about The Music Trilogy

It's a very long audiobook and I took time and enjoy listening to each and every book. The time spent listening is all worth it.

A very long, but interesting, trilogy

"This book was given to me for free at my request and I provided this voluntary review." When I saw how many hours this ran, I was hesitant to start, but I"m so glad that I did This is a wonderful story spaning generations of a family in the music industry. It is heart warming and I cried in more than one place. I believe that you will enjoy this book also.

Everything she writes speaks to me

I have finally found my favorite writer.
Denise Kahn is brilliant, everything she writes , music, art, cultures and history all together in a truly interesting and unpredictable way, thank you Denise!

A Trilogy full of life itself...

I really really like this series of books. They literally take the reader once around the world and are full of interesting characters and thoughts. Very entertaining.

Denise Kahn does a great job when narrating her stories. It was a pleasure to listen. Also, you can either read only one of the books as a stand-alone story or you can read all three of them. The connecting topic - as the title suggests - is music. Personally, I like the third volume Best.

Ms. Kahn does an amazing job of relaying these stories in audio form. As the author, as well as the narrator, she brings a distinct feel to the characters in a style that is clear and precise. I enjoyed each book and the emotions Ms. Kahn demonstrates through her voice. I highly suggest this audio if you have a love and infinity for music and some of its history.

This story starts with the creation of a vase and follows it as it travels from person to person and their lives as well as how music plays a part in each one. It was quite interesting and the author adds plenty of facts along the way.


Obsession of the Heart:

Obsession of the Heart was quite thrilling at times as it showcases a young woman and her transition into stardom as well as the lives of those around her. It has several intense moments of violence as well as passion and I was heavily invested in the outcome.

This book covered the journey of a young man from his teenage years through his boot camp days in the Marines, and into the Iraq war where he meets and falls in love with Sam, a nurse at a combat surgical hospital. The author colored each phase with a picture so sharp and clear I felt as though I stood right beside Max, and Sam as well, as they both pushed through to become survivors. And along the way is the music that cannot be missed and only adds to the richness of this story.

This is a story worth keeping on my bookshelf.

I wish I had this close a bond to music. I love music of course. Just not my talent. I have appreciated those that crossed my path with the skills. They brought this kind of harmony to my life. I appreciate the honor of getting to share your family history. Thank you for writing for us. Thanks to your son for his service. Thanks to your family for sharing the art and magic of music in our world.

this audiobook is like wow I gave this one a shot because the description of it sounded good I wasn't sure if i would like it or not. but I ended up liking it. I couldn't put it down. it's a very unique audiobook.

Incredibly well written stories that grab you from the start and pull you into the story. I listened to this whole trilogy over a weekend road trip and loved every minute. Perfect narration!

Such an amazing, well-written read that is absolutely lovely and compelling!

Loved every moment of it. Cannot wait to listen to it again.

A well worth read!

The narrator was perfect! A great listen.

I got this story via audiobook boom and this is my voluntary review. I begin this story with skepticism. After the first thirty minutes lost track of time and it was the middle of the night. The stories seemed to meld into each other and kept me listening until my eyes said to go to sleep. The stories are amazing and well developed. The narrator was outstanding. This is a long set of stories but be prepared to get involved with the characters and their journies. I was not disappointed by any of them and got caught up in the lives of the different characters. That vase really made a journey and became a character on its own. I loved how the young man was able to save himself and then clear his parent's names as well. There were so many other tiny stories inside each story. It is well worth the listen in my opinion.