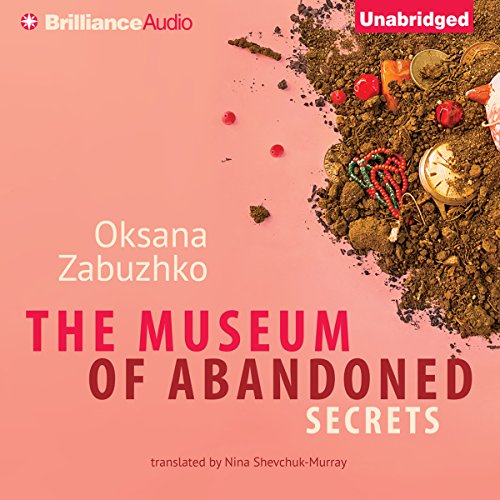 The Museum of Abandoned Secrets

By: Oksana Zabuzhko
Narrated by: Mary Robinette Kowal
Try for $0.00

In 2003, television journalist Daryna Goshchynska unearths a worn photograph of Olena Dovgan, a member of the Ukrainian Insurgent Army killed in 1947 by Stalin’s secret police. Intrigued by Olena’s story, Daryna sets out to make a documentary of the woman’s extraordinary life and death - and unwittingly opens a door to the past that will change the course of the future.

Spanning 60 tumultuous years of contemporary Ukrainian history, this multigenerational saga weaves a dramatic and intricate web of love, sex, friendship, and death. At its center are three disparate women linked by the abandoned secrets of the past - secrets that refuse to stay hidden.

What listeners say about The Museum of Abandoned Secrets

In all fairness, I am only just 2 hours into this book, but I am more disappointed with this work than any I can recall in all my 7 plus years of buying audio books. The author rambles on endlessly with no real direction. I cannot recall a single word or detail from the past 2 hours. She has described a variety of people, her boyfried, her dad and her mom in the past 2 hours with no real connection to the story. I am hoping it gets better, but not sure I have the stomach to listen to much more. If you're looking for an engaging read with a story that draws you in, this is not it, at least not immediately (or shortly thereafter).

Not sure, but searching now.

Have you listened to any of Mary Robinette Kowal’s other performances before? How does this one compare?

No; but the problem is not the narrator. It's the slow dry start to the story.

Was The Museum of Abandoned Secrets worth the listening time?

I want a refund!

The story was beautifully written, if overwrought (an editor to shave off about 200 pages would have been a good idea).
The reader was meh and her mispronunciations of all things Ukrainian was unbearable—nails on a chalkboard unbearable. Most people who are going to invest this much time in an audiobook are probably somewhat familiar with the country/language to know that the names of many people and cities were absolutely butchered...so bad.

The use of language and the voice acting both make this book one of my all time favourites. It provides a tantalizing glimpse into Soviet Ukraine and identity in the modern country. I highly recommend it.