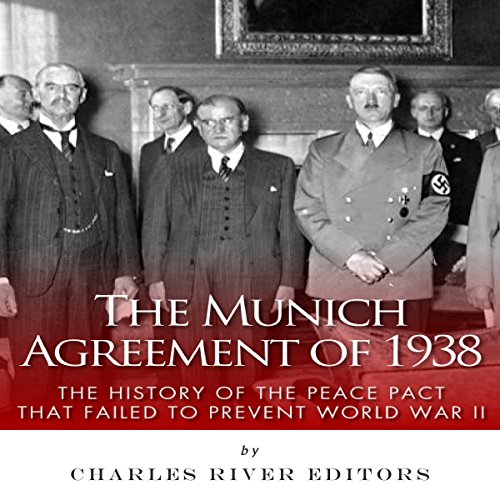 The Munich Agreement of 1938: The History of the Peace Pact that Failed to Prevent World War II

By: Charles River Editors
Narrated by: John Skinner
Try for $0.00

"My good friends," the mustached, bony man with thick eyebrows and large, strong teeth somewhat reminiscent of those of a horse, shouted to the crowds from the second-floor window of his house at 10 Downing Street, "[T]his is the second time in our history, that there has come back to Downing Street from Germany peace with honor. I believe it is peace for our time."

The man addressing the crowd, British Prime Minister Neville Chamberlain, had just returned from the heart of Nazi Germany following negotiations with Adolf Hitler, and the crowd gathered outside the English leader's house on September 30, 1938 greeted these ringing words with grateful cheers. The piece of paper Chamberlain flourished exultantly seemed to offer permanent amity and goodwill between democratic Britain and totalitarian Germany. In it, Britain agreed to allow Hitler's Third Reich to absorb the Sudeten regions of Czechoslovakia without interference from either England or France, and since high percentages of ethnic Germans - often more than 50% locally - inhabited these regions, Hitler's demand for this territory seemed somewhat reasonable to Chamberlain and his supporters.

With Germany resurgent and rearmed after the disasters inflicted on it by the Treaty of Versailles following World War I, the pact - known as the Munich Agreement - held out hope of a quick end to German ambitions and the return of stable, normal international relations across Europe. Of course, the Munich agreement is now notorious because its promise proved barren within a very short period of time. Chamberlain's actions either failed to avert, or actually hastened, the very cataclysm he wished to avoid at all costs.

What listeners say about The Munich Agreement of 1938: The History of the Peace Pact that Failed to Prevent World War II