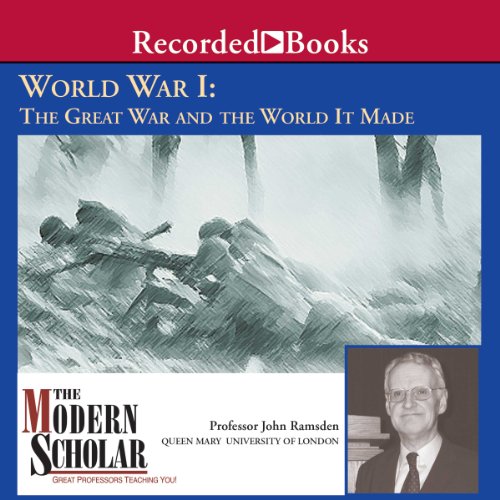 "The Great War", as it was known at the time, was also said to be the "war to end all wars". It seized all of Europe and much of the rest of the world in its grip of death and destruction.

The first truly modern war, it changed how war and peace would be conducted throughout the remainder of the 20th century and even to the present. The Great War was a time of "firsts" and opened the door to the modern era. Almost all the major developed countries had a role to play in this war, as they never had before. This was the first time for fighting on land, at sea, and in the air. Modern weapons and munitions were developed in previously unimaginable quantities.

By the end of the war, international politics, the relationships between the individual and the state, gender relations, and the role of artists and the media were all drastically changed.

World War I laid the foundation for the modern world. This course examines the major events of the war to further understand how they led to the shaping of this new world.

Reading and studying history has always been on of my hobbies and I would say that the Frist World War is one of my favorite subjects of study. I usually read and listen to any books or courses on the subject that I can find and generally while I learn one or two new items of interest from each book or course, I generally have never found anything that gave me a new persepctive. This course changed that. I found it to be excellent. Although he made a couple of minor factual errors in a few of his lectures, I found both Professor Ramsden's course to be very well organized and presented as the course focused not just on the war and its causes (which is the traditional material) but also its legacy to this day. Most interesting to me were the lectures on the war's impact on art and literature (first time I ever took a course that focused on this area) and the impact of the war on the post Second World War world (all the way down to 1987). I would strongly recommend this course to anyone who is interested in the subject matter as well as to anyone who has never read or studied the First World War and has had an interest to learn something about it. This course is a great addition to the Audible library

This was an amazing series of lectures. Manages to perfectly balance going into the small details and giving a broad view of the entire war. My understanding of WWI has completely changed. Entertaining and interesting the entire way through. I highly recommend this.

For someone who really didn't know an awful lot about WWI since WWII gets all the press, this was the perfect book to gain perspective on the times and the war itself. I really recommend checking this out. My only complaint is that I wish it was even longer and went deeper into each subject.

Excellent discussion of the war. I listened to an audiocourse by another provider immediately before this lecture, and still managed to learn quite a bit from this course. Prof Ramsden presents the material in a very logical order, and is an excellent lecture. Highly recommended.

Back to School, in the very best way!

I love "The Modern Scholar" series, and this is one of the best I've experienced so far. The lectures are riveting - wish I'd had this guy as a Prof! Even though I have read a number of good histories of WWI, I found this full of new and interesting information. I highly recommend this!

One of the finest in the series

What did you love best about The Modern Scholar?

I'm a huge fan of The Modern Scholar, using nearly every monthly credit to purchase a new course. John Ramsden's lecture on WWI ranks with the best I've heard, offering a master historian's perspective on a conflict that shaped the remainder of the 20th century. Being more familiar with WWII, I was largely ignorant of the geopolitical, literary, artistic, medical, military, and psychological ramifications of the first war. This course is essential for anyone seeking to broaden their historical understanding.

Great lectures, easy to listen to

I'm not a history nerd but i was curious about the events surrounding WWI since it is a much less widely publicized story than the Second World War. This lecture set offered the exact level of detail i was looking for. The narration was easy to listen to. It provided just enough information without drowning the listener in boring details. I would recommend it.

Explains It All Very Well

This is a really good lecture series that really left me satisfied that I learned something. I feel that listening to this series left me with very real understanding of what caused the war, what impact the war had on Europe, America and other global impact, and what the consequences of the war were both short and long term. I would have liked to have had some insight into the pandemic of 1918 added, but I really enjoyed listening to this and I learned a lot.

A great overview of the Great War

This is my first Modern Scholar book and I thoroughly enjoyed it. Professor Ramsden did a great job of providing a concise overview of how the war started and the war itself. He mentioned Ernest Hemingway's book "Farewell To Arms" as an excellent example of the war on ski's. I shall obtain the book to read as I found it on Audible. As a child growing up in California I read the poem "In Flanders Field" and pictured in my mind a grave yard field full of golden California poppies. Even though I have been to Europe and seen the fields of red poppies, the images of Flanders Fields had not changed in my mind until hearing Ramsden tell of the red poppies. One little pearl that Ramsden did not state was the fact that more poems were written about WWI than any war in history. I was fascinated by some of the similarity between WWI and WWII. If one had read history one could have anticipated the generals moves at time. I am off now to read more about WW1.

While delivering these lectures Prof Ramsden shared the information in an engaging and easy to follow manner. ( I am still listening to The Guns of August, as recommended.) I had previously downloaded' ' Six Months That Changed The World' and found those lectures so Interesting I had followed up with 'World War1'
I do buy a poppy to wear on the 11th November. The Red Poppy of Flanders Fields on Armistice Day is one export/import I am pleased was spread to Australia from the US. I did not know that till I heard these lectures. Nor did I know that it was the cessation of copyright, that allowed the movie
"Oh What a Lovely War" to be made.
And I have to think about the Spanish Civil War having it's roots in WW1.
No doubt I will listen to these lectures a few times, and follow up with more reading.
At least now I understand a little better why an assassination in Croatia paved the way to The Great War...and that paved the way to...