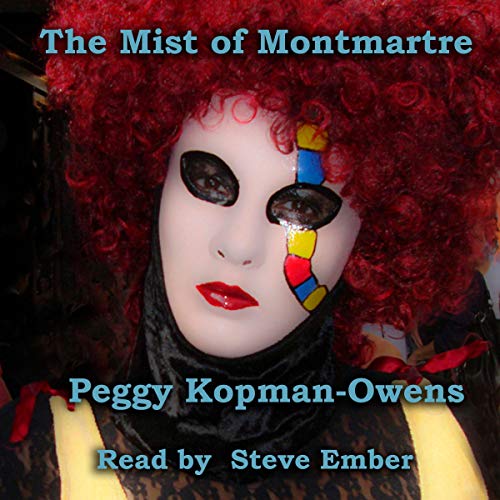 The Mist of Montmartre

By: Peggy Kopman-Owens
Narrated by: Steve Ember
Try for $0.00

Surviving on the streets of Paris as an artist's model had been difficult, but Laura wanted to be remembered on canvas, as Henri de Toulouse-Lautrec's paintings had been immortalized. In another place and time, Laura's alliance with the rich and powerful of Paris might have cost her head. However, this was 21st-century France, where the rich and the poor had learned to negotiate tolerance.

Olivette, Franz, Rudi, Gretchen, Martine, Gaston, and Nicolai chose Montmartre, where they had become soldiers in a war against ennui and mediocrity, putting on their canvases and taking to their beds - other men's wives, other wives' husbands, and the whores willing to follow them into battle. When one of the richest men in Europe offers to make Laura his wife, she must choose which one she has become.

What listeners say about The Mist of Montmartre

The Mist of Montmartre

This was my first audio book experience and I thoroughly enjoyed it. Peggy Kopman -Owens has written a fascinating tale of Laura, a woman torn between two “worlds,” and the people of importance to her in both. The characters are compelling, and she finds herself loving them, doubting them, and questioning her own values and desires. “The plot thickens” as she tries to find answers in ways that lead her down a dark path. Her life spirals, and everything comes to a shocking conclusion. Steve Ember does a masterful job narrating this dark tale. The rich quality of his voice lends itself beautifully to this story. Thank you, Peggy and Steve!

The Seduction of a Romantic Environment

The story of a woman of Paris trying to live by her own values amid a plethora of opinions and traditions is described and articulated beautifully.

The Tribulations of an Artist's Soul

I was given a free review copy of the audiobook at my request and have voluntarily left this review.

This is an audiobook that will need to be given space and time to follow to the end. Set in the classic Montmartre scene of starving artists, geniuses, and the scum of society who live for the day, given to excesses and leaps of pure creativity, only to plummet into the gutter of life. This is the tragic story of Laura an aspiring artist who sells her body for money and love, and finds her way out of the world she so loves, to share her life with creme de la creme of Parisian society. There she finally finds wealth and the love she always craved and was never freely given, until her tortured past comes back to hunt her and take away all of her hard-earned serenity. She starts doubting her older husband's love, her decision to renounce her artistic ambitions, her rights to become one of society trend-setter. The road of self-destruction she embarks on, will take her back to her tormented roots, and ultimately the mystery of her death will reflect the mystery of her life. Poignant, insightful, heart-wrecking, this tale of bohemian life in historical Paris will keep you mesmerized.
The narration is good if too monotonic. A little more emphasis would have made it excellent.

This experience was outside my comfort zone, since I usually read fast-paced crime novels these days. Also, I am a fast reader and there is no way to speed up the read when a narrator sets the pace.


The characterisation is excellent and were I only being asked to rate that feature alone, I'd have rated the book highly. Unfortunately, the repetitive nature of the writing made the story tough going at times. Often, I felt like I was falling asleep at the wheel. The final chapters were, however, well-written and most enjoyable.


I was asked particularly to review the narrator and I'd have to say his voice is clear with a lovely deep tone. However, if I am being honest, he made the book sound boring, more so that it actually was, I thought. I honestly fell asleep several times, lulled by the monotone speech.

I am positive I'd have enjoyed the book far more had I read it on a kindle or in paperback.
But, I must add, I am very glad I was asked to try an audible book for the first time in my life....I know to avoid them in the future and stick to my usual page-turning...

Surviving on the streets of Paris as an artist's model had been difficult,
a good book enjoyed it