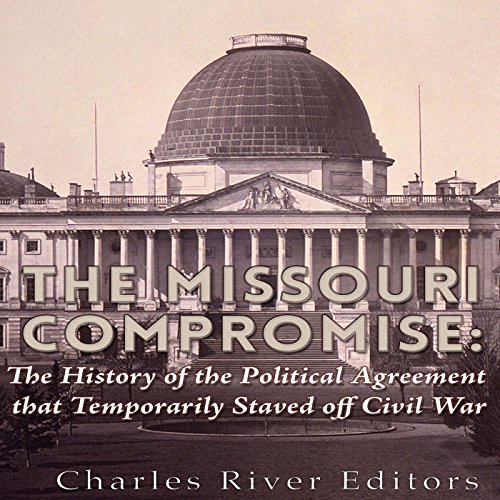 The History of the Political Agreement That Temporarily Staved Off Civil War
By: Charles River Editors
Narrated by: Scott Clem
Length: 1 hr and 20 mins
Categories: History, American
3 out of 5 stars 3.0 (1 rating)

"[T]his momentous question, like a fire bell in the night, awakened and filled me with terror. I considered it at once as the knell of the Union. It is hushed indeed for the moment. But this is a reprieve only, not a final sentence. A geographical line, coinciding with a marked principle, moral and political, once conceived and held up to the angry passions of men, will never be obliterated; and every new irritation will mark it deeper and deeper." (Thomas Jefferson)

When President Thomas Jefferson went ahead with the Louisiana Purchase, he wasn't entirely sure what was on the land he was buying, or whether the purchase was even constitutional. Ultimately, the Louisiana Purchase encompassed all or part of 15 current US states and two Canadian provinces, including Arkansas, Missouri, Iowa, Oklahoma, Kansas, Nebraska, parts of Minnesota that were west of the Mississippi River, most of North Dakota, and many others. The purchase, which immediately doubled the size of the United States at the time, still comprises around 23% of current American territory.

With so much new territory to carve into states, the balance of Congressional power became a hot topic in the decade after the purchase, especially when the people of Missouri sought to be admitted to the Union in 1819 with slavery being legal in the new state. While Congress was dealing with that, Alabama was admitted in December 1819, creating an equal number of free states and slave states. Thus, allowing Missouri to enter the Union as a slave state would disrupt the balance.

The Senate ultimately got around this issue by establishing what became known as the Missouri Compromise. Legislation was passed that admitted Maine as a free state, thus balancing the number once Missouri joined as a slave state. Moreover, slavery would be excluded from the Missouri Territory north of the parallel 36°30′ north, which was the Southern border of Missouri itself. As a slave state, Missouri would obviously serve as the lone exception to that line.

The Missouri Compromise of 1820 staved off the crisis for the time being, but by setting a line that excluded slave states above the parallel, it would also become incredibly contentious. The young nation kept pushing further westward, but trying to figure out how to expand without offsetting the slave-free state balance was tearing the nation apart.

When popular sovereignty undid the compromise and became the standard in Kansas and Nebraska in the 1850s, the primary result was that thousands of zealous pro-slavery and anti-slavery advocates both moved to Kansas to influence the vote, creating a dangerous (and ultimately deadly) mix. Numerous attacks took place between the two sides, and many pro-slavery Missourians organized attacks on Kansas towns just across the border.