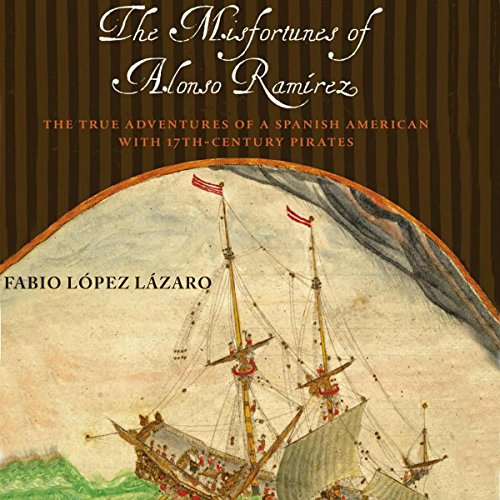 The Misfortunes of Alonso Ramírez

By: Fabio López Lázaro
Narrated by: Ted Brooks
Try for $0.00

In 1690, a dramatic account of piracy was published in Mexico City. The Misfortunes of Alonso Ramírez described the incredible adventures of a poor Spanish-American carpenter who was taken captive by British pirates near the Philippines and forced to work for them for two years. After circumnavigating the world, he was freed and managed to return to Mexico, where the Spanish viceroy commissioned the well-known Mexican scholar Carlos de Sigüenza y Góngora to write down Ramírez's account as part of an imperial propaganda campaign against pirates.

The Misfortunes of Alonso Ramírez has long been regarded as a work of fiction - in fact, as Latin America's first novel - but Fabio López Lázaro makes a convincing case that the book is a historical account of real events, albeit full of distortions and lies. Using contemporary published accounts, as well as newly discovered documents from Spanish, English, French, Portuguese, and Dutch archives, he proves that Ramírez voyaged with one of the most famous pirates of all time, William Dampier. López Lázaro's critical translation of The Misfortunes provides the only extensive Spanish eyewitness account of pirates during the period in world history (1650-1750) when they became key agents of the European powers jockeying for international political and economic dominance.

An extensive introduction places The Misfortunes within the worldwide struggle that Spain, England, and Holland waged against the ambitious Louis XIV of France, which some historians consider to be the first world war.

What listeners say about The Misfortunes of Alonso Ramírez

The book is repetitive and contrived. It was published as a confession for political reasons in its time and might have been forgotten. There is a long introduction which gives good context, although, it strangely repeats itself at some length. But it is a (probably) credible first person account of pirate life during its so called "golden age" (late 17th, early 18th centuries). In that, it is unusual. Lazaro writes speaking as Ramirez on his return to legal life in Mexico. Piracy was a hidden world, as it must have been. As a result, age of sail pirates have been fictionalized and romanticized in the most fantastical ways, not unlike organized crime in our present day. Credible histories are surprisingly rare. Also, for English readers, here is a colonial Spanish perspective - often overlooked in our own histories and fictions.