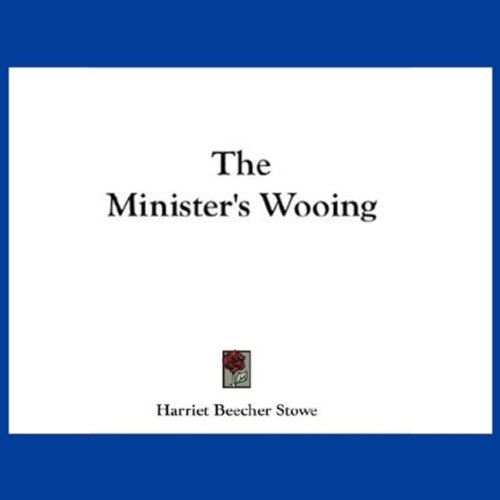 First published in 1859, and set in 18th-century Newport, Rhode Island, The Minister's Wooing is a historical novel and domestic comedy that satirizes Calvinism, celebrating its intellectual and moral integrity while critiquing its rigid theology.

Mary Scudder lives with her widowed mother in a modest middle-class home. Dr. Hopkins, a Calvinist minister who boards with them, is dedicated to helping the slaves arriving at Newport and calls for the abolition of slavery. The pious Mary admires him but is also in love with the passionate but skeptical James Marvyn who, hungry for adventure, joins the crew of a ship setting sail for exotic destinations. When James is presumed lost at sea, Mary fears for his soul, and consents to marry the good Doctor.

With important insights on slavery, history, and gender, as well as characters based on historical figures, The Minister's Wooing is, as Susan Harris notes in her Introduction, "an historical novel, like Hawthorne's The Scarlet Letter or Catharine Sedgwick's Hope Leslie or A New England Tale; it is an attempt through fiction to create a moral, intellectual, and affective history for New England."

If you could sum up The Minister's Wooing in three words, what would they be?

Mary, the heroine, wrestled with her conscience and culture heroically.

Who would you have cast as narrator instead of Melbra Sibrel?

Someone who actually loves the subject matter or could respect and understand the heart of the work. She really seemed to despise this book.

When Mary makes a marriage decision.

This is one of my favorite books. I wish there was another recording that I could fully enjoy. The content fully carries my 5 star rating and causes me to not allow the narrator to rob listeners of a great book. Jeff's review expressed my thoughts perfectly.

First, the good news. This book is wonderful; full of the insight, wit and import that made Uncle Tom's Cabin so critical. Stowe was keenly observant and quick to call something wrong when it was wrong. In this story, she still holds to her anti-slavery stand, though it is a secondary issue here. This book alone would have put her among Americas best and most important authors. Well worth the listen.
Second, the bad news. The narrator does a poor job. Her accents are horrible, and her mispronunciations jar the ear a bit. The real problem, however, is that she reads the book in a mocking manner. She treats what is serious in the book cynically, as if it were her place to let us know that the opinions expressed are somehow out of date or silly. I prefer to make those judgments myself, and not have to fight the narrator. Overall, she seems to treat the book with contempt.
Third point is that the review incorrectly implies that Stowe was mocking the Calvinist theology. Nothing could be further from truth. It is imposing 21st century thoughts on a 19th century writer. Stowe was the daughter of Lyman Beecher, sister of Henry Ward Beecher and wife of Calvin Stowe, all important figures in American Calvinism. She was certainly not criticizing the theology, though she seems to have been arguing for a softer interpretation of predestination.

Overall, don't let the narrator keep you from this book. It is not only important for the understanding of early American life, it is also well written and just plain fun.

Would you listen to The Minister's Wooing again? Why?

Perhaps, though I am more apt to listen to other works by Harriet Beecher Stowe.

I loved how Stowe described the intricacies of each character's inner workings, in particular the thought processes over moral struggles each faced. Stowe describes human nature with a lot of humor and far reaching grace. I also enjoyed hearing about Aaron Burr and a bit about Alexander Hamilton from Stowe's character's perspectives, especially as I've been listening to the musical "Hamilton" as of late.

She was amazing. I listen to many audiobooks, and her narration was superb! She was able to bring each character to life. My favorite character was Virginie de Frontenac, who was so full of passion for all things!

I felt moved when Jim returned home, unexpectedly, and how he had a change of heart about his life's path and how he and Mary were reunited.