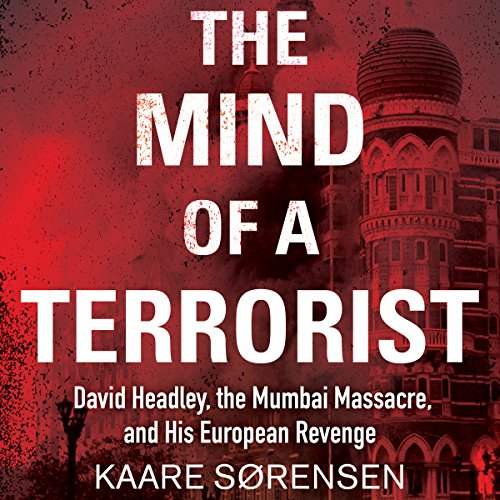 The Mind of a Terrorist

With the pacing of a thriller, a veteran journalist's account of the terrorist behind the Mumbai attacks and a planned attack in Europe.

David Headley, the American Pakistani also known as Daood Gilani, lived a double life. One day he would stroll through Central Park in his tailored Armani suit as a true New Yorker, and the next he would browse in the bazaar in Lahore wearing traditional Pakistani clothes. One day he would drink champagne at the most extravagant clubs; on another he would prostrate himself in prayer in remote Pakistan and pledge fidelity to Allah.

Born in 1960, the son of an American mother and a Pakistani father, with one blue eye and one brown, Headley grew up between East and West. He was attracted to both worlds, even working as an informant for the US government, until one day he found he had to choose between the place of his birth and a radical form of Islam preaching global jihad. This is the disturbing story of the mastermind behind the 2008 attacks in Mumbai that killed 166 people - who two months later flew to Copenhagen to plan another act of terror with the help of al-Qaeda sleeper cells in Europe.

Veteran journalist Kaare Sørensen has reconstructed his movements and planning in a tense feat of reportage. His account, based on extensive reporting, eyewitness interviews, and documentation including wiretaps, court transcripts, and emails by Headley accessed from a chat room cache of 9,000 messages, offers unprecedented insight into the mind of the terrorist. The author has provided updates and a new preface for the English-language edition.

What listeners say about The Mind of a Terrorist

Story of the Mumbai Terrorist Attack (2008)

Narration: Clear with gravitas and compelling shifts in intonation and pace.

Story: Horrific, compelling moment-to-moment telling of the attacks followed by insightful analysis of the political, religious beliefs promoting and opposing these attacks.

I was shocked that an American played such a prominent role in this terrorist attack.

The audio is an excellent, complementary extension of the extremely well done movie, which takes some poetic liberty with interpreting specific facets of the attack.

This is yet another book that presents the mindset of various Pakistani establishments towards India. The question of whether these are state sponsored or not does not really matter. Its an agenda that is indoctrinated at a very young age that becomes the sole motive for some impressionable minds.

Dawood Gilani alias David Coleman is one such instance who scales the heights with assistance from his Genes and US Passport. Its a truly fascinating story that exposes weaknesses of Indian security agencies and how complacent US could be when the attacks are not intended towards its homeland or NATO.

An excellent account of the mental states of the group, that commited the outrage, in Mumbai, where dozens of innocent people were murdered. The analysis of David Headley a.k.a. Muhammed something or other, a half American half Pakistani Islamic extremist is a warning to all of us. He uses his Western identity to infiltrate American society, even marrying an American woman, who knows nothing of his real character. He moves effortlessly between America and Pakistan, presenting an almost schizophrenic personality of a mixed race child.But Islam, the religion of his father is predominant: why is it that the man's religion always dominates the children, never the other way around.I really enjoyed this book with it's psychological profiling and I would recommend it to any one who wants a deeper analysis into the mind set,that produces such violence. Narration is good too.