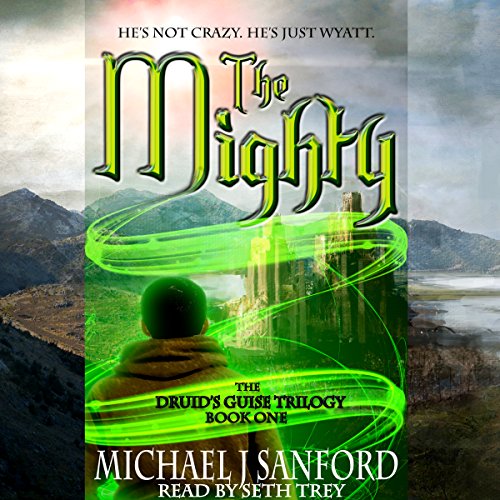 By: Michael J Sanford
Narrated by: Seth Trey
Try for $0.00

Fifteen-year-old Wyatt has been sent to a treatment center for "disturbed youth". No one understands him. He wants nothing more than to escape from it all.

Through a magic he doesn't understand, he finds himself in Hagion, a realm of fantastical creatures and immense wonder. He quickly finds himself in the company of a runaway warrior and two Children - a strange race of underground creatures that seem forever joyful. They claim Wyatt is a Druid, a powerful figure of myth and legend, sent to restore peace to all of the Realms. He doesn't bother correcting them.

Finally, he can be the hero he's always dreamed of.

But claiming to be a hero and actually being a hero are two different things. And it's a lesson Wyatt may have to pay dearly for.

What listeners say about The Mighty

A great listen. Sorry for not doing this but life has me in its grip and I couldn't escape. The story was good and I loved every moment of it. I am looking forward to reading more of your story at a later date.

This is the type of book that you would have to make yourself sit and bare the embarrassment (which is the reason it was written so well!) for the first 30 minutes. After that, you will start to enjoy it further and further throughout. Narration was awesome, story was awesome, and you enjoy it all. Loved it!

FYI:
There is fowl language, especially from the kids.

Definitely felt like young adult novel but was entertaining and interesting to the end. Some parts felt a little disjointed and confusing but didn't stop me from going on. I'd like to listen to the next one.

The whole time I was listening to this book I felt like I was watching a fantasy cartoon. The narration was ok once I got used to it but starting out it seemed a little too hurried. I was voluntarily provided this free review copy audiobook by the author, narrator, or publisher.

I thought this was an interesting story with a great deal of thought and imagination. But I found it an enigma, whilst the language used was for adults, I felt the story was aimed more at children of a similar age to Wyatt. Good on audio