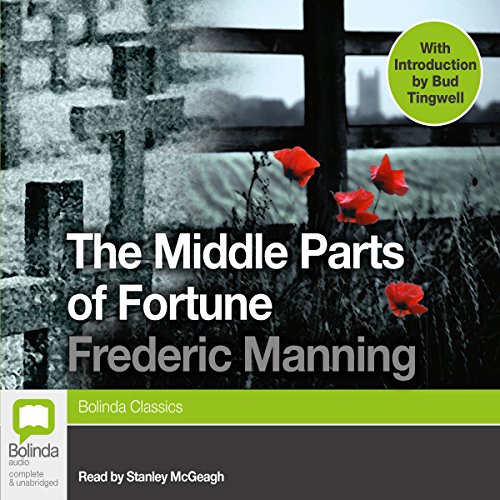 The Middle Parts of Fortune

By: Frederic Manning
Narrated by: Stanley McGeagh
Try for $0.00

First published anonymously in 1929 because its language was considered far too frank for the public circulation, The Middle Parts of Fortune was hailed by T.S. Eliot and Ezra Pound, by Lawrence of Arabia and Ernest Hemingway, as an extraordinary novel. Its author was in fact Frederic Manning, an Australian writer who fought in the Battle of the Somme in 1916, and who told his story of men at war from the perspective of an ordinary soldier.

Never before published in Australia, The Middle Parts of Fortune is now recognized as a 20th-century classic.

"The finest and noblest book of men in war." (Ernest Hemingway)

What listeners say about The Middle Parts of Fortune

This is about Bourne of the British Expeditionary Force in France during WWI and about his and his infantry comrades lives during a matter of months. This tells of the gritty, dirty, exhausting, anxious, scared, and courageous existence of these men. It is told in the third person that is a insightful, sensitive, and bold masterpiece of the genre. The dialogue is of the dialect and the narrator did a great job adapting all the characters in an authentic way. I have read a good many WWI memoirs and novels and would say this one is one of the grittiest, having the visceral feel creative nonfiction.

An intricate insight into the everyday lives of men at the front during the great war. A must for war buffs however, I found the literary style slightly lacking. There is a lot of dense information dumping, perhaps necessary for audiences of the time however for the modern reader that I am, it seemed to kick me out of the story all too often.

Difficult Read - I Liked it by the End

War as it really is, both the boredom and the horror of it.

Who might you have cast as narrator instead of Stanley McGeagh?

Somebody who knows French!

Why weren't more books like this written? First hand accounts with genuine language and real (often gruesome) details.
In the book, the average soldier is concerned with small, petty things when not fighting, and then can be suddenly - matter-of-factly - ended when in the front line.
The writer - though the book is autobiographical - seems as detached as his main character is. There no sentimentality in the book - which came as quite a shock to me. I kept waiting for it, but it didn't come.
Excellent book.