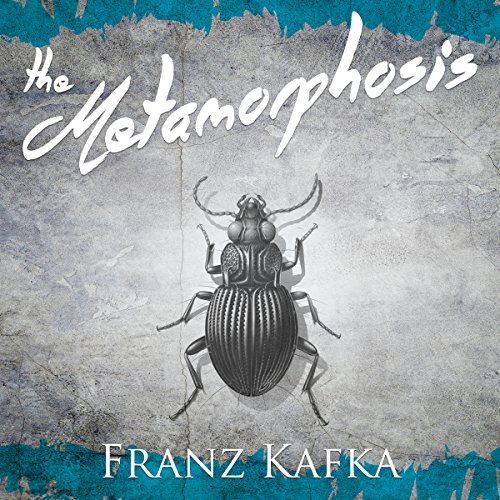 The Metamorphosis is a short novel by Franz Kafka, first published in 1915. It is often cited as one of the seminal works of fiction of the 20th century and is widely studied in colleges and universities across the western world. The story begins with a traveling salesman, Gregor Samsa, waking to find himself transformed into an insect.

What listeners say about The Metamorphosis

J.D. Kelly's version of Franz Kafka's The Metamorphosis is very good. Kelly's tone throughout this story makes the main character believable. It is not easy to sound like a man who's personality and lifestyle are so constrained by the singular focus of his job and by his pathologically narrowed range of affect that even being turned (overnight) into a grotesque beetle is taken in stride and fails to trigger any sort of hysteria/terror.

This story is brilliant in that the overarching message is so powerful that it allows the reader to move briskly through the metamorphosis to the conclusion in which we accept what has always been most important to all of the characters from the beginning (financial well-being/survival within current societal constraints). The main character having become a beetle and eventually perishing as a result of the metamorphosis becomes the elephant in the room that everyone comes to accept and brush aside despite it's enormity and outlandishness.

To pull the reader into that degree of complicity with such insane characters one must be a phenomenal writer, as Kafka was, but in this case the process is helped along quite a bit by Kelly's matter of fact narration style. Kelly is masterful at doling out emotion in very small controlled portions and maintaining a Keep Calm and Carry On tone throughout the entire story.

I absolutely recommend both this author and this narrator to other readers. Thank you Audio Book Boom and J.D. Kelly for this complimentary copy of Kafka's The Metamorphosis in exchange for my fair and unbiased review.

when a great classic meets a great voice

I received for free for an honest review. truly enjoyed the audible version of this classic tale. an interesting take on how a family would handle an internal crisis.

Fantastic narration for this literary classic!


I was given this free review copy audiobook at my request and have voluntarily left this review. The fact that I was gifted this book had no influence over my opinion of it

The Metamorphosis is Franz Kafka's classic 1915 Russian tale of a young man, Gregor, who wakes up one day to find himself turned into the a giant bug.

The story shows Gregor's family, who had relied on him for money, blaming him, resenting him and then dealing with the fallout of the change. It deal with themes of isolation, sympathy and alienation.

While it is a short read, it is fairly dense in imagery and ideas. I had previously had to read in in high school, and I wish that audiobook versions had been readily available back then.

J.D. Kelly narrated the book well. He is clear, well paced, and enjoyable to listen to. There is nothing outstanding in the narration, in terms of characters or voices, but the book doesn't have a large amount of dialogue that lends itself to that.


I was voluntarily provided this free review copy audiobook by the author, narrator, or publisher.

I cannot remove it. What can I do?
Fascinating, but I want it off my phone. No option offered for removal.

This is possibly the strangest novel that I’ve ever read. Gregor gets turned into a beetle and the novel follows Gregor in the following months. I kinda wish that there was an explanation for why Gregor was turned into an insect.

Kafka has a brilliant writing style and I did enjoy the novel. I particularly liked how the title could refer to Gregor or his sister, because the novel is written from Gregor’s perspective, but it feels like it’s much more about his sister’s growth.

I think that I read this book many, many years ago and have a vague recollection of it. However, this Audible version really made the book stand out in a way that my reading it never did.

Gregor is an ordinary young man, stressed by his responsibilities beyond what he can endure. When he wakes up one morning unable to move, he realizes that he has been transformed into a large beetle/cockroach. This book follows his changes and mostly follows his family's changes toward him.

Gregor has been supporting his father (for unspecified reasons) by working hard at a job he hates. He is also supporting his younger sister, Greet, and his mother. After his metamorphosis, only his sister seems to care what happens to him. In spite of the fact that they were totally reliant on his support, his parents just want to lock him in a room and forget that he exists.

I am unsure how to classify this book. Is it horror? Satire or allegory? Or, maybe a combination of all of these and more. I can see it as a metaphor of how a family might react when one of them becomes gravely ill. Unable to cope or even to face the sick person, they instead drive him away by their actions. I found myself feeling great empathy for Gregor and wanting to strike his family for the way they treated him.

The narrator did an excellent job. His rendition added a lot to the book. I know that this book will stick with me for a long, long time.

Awaken As An Insect. Useless

Gregor awakes one morning as an insect..worries he cannot go to his job as a traveling salesmen which he hates. He is paying off his fathers debt to his employer. There is a feeling of being used, unappreciated and unloved by his family, except his sister
The story addresses his family’s reactions and his
The narrator was incredible. Gregor appears somewhat unaffected by this transformation
as if this is what he expects from his life. Sad and disturbing. Thought provoking.

Such a great story

I am sad to say I never read this before. I love the strangeness of the tale as a whole. I don't care why and I don't care whether there is a deeper social commentary to be explained. I love the fact that something truly horrible and unexplained happened and the tale unfolds from there. This is the kind of story that keeps me reading. Now I am looking for my next fix.