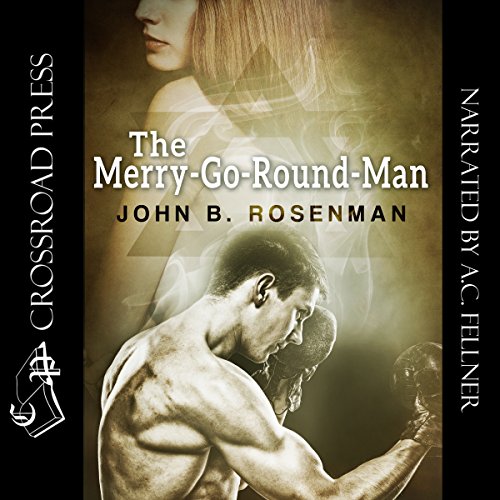 Do you believe you can shape your future, determine your destiny? One spring day in 1954, three sixth grade boys make a bet: the one who can climb first to the top of a small green merry-go-round outside their school will be "Champ for life!" For the rest of his days he'll be “on Easy Street!" So they engage in a "mad scramble - clambering over each other with murderous intent," and eventually one of them reaches the summit and stands triumphant, lording it over the others. He is the merry-go-round man.

The Merry-Go-Round Man is a novel about three boys growing up in the so-called innocent days of the Eisenhower ‘50s. It's about rites of passage, loss of innocence, sexual initiation, racism, and much more. Of the three boys, Johnny Roth is central. He possesses two transcendent gifts which are only beginning to emerge as the novel begins. One of them is the ability to box or fight, something he deeply fears. The other ability is artistic and mystical. He is a natural expressionistic painter of vast potential. Unfortunately, Johnny's father, an orthodox Jew, hates both of these pursuits, and his opposition tears Johnny apart.

Of the two other boys, Lee Esner grows up to be a gifted football player with what looks like a lucrative pro career ahead of him. He also has a flair for attracting beautiful girls. Is he the merry-go-round man? The third boy, Jimmy Wiggins, is black and from the ghetto. Attending an elite white school with Johnny and Lee, his naive love for a pretty white girl is destroyed by her cruel racism. Another rite of passage. Symbols such as a burning Buddhist monk make us ask whether anyone is really The Merry-Go-Man in life.

What listeners say about The Merry-Go-Round Man

Touching coming-of-age story, for everyone.

Would you consider the audio edition of The Merry-Go-Round Man to be better than the print version?

I can't answer this honestly becasue I have only listened to the audio version and not read the print version. Though I can say that the audio book was very well narrated by Aze Fellner and well produced.

The story touched on many though subjects and the author handled them quite thoughtfully in my opinion. It threw together 3 very different guys and produced very interesting results. Situations we have all been exposed to growing up like racism, bullying, general insecurity and regret. I thought the characters are well written and seemed to be quite 'believable'.

Which character – as performed by Aze Fellner – was your favorite?

For me, Jimmy Wiggins. Innocent, sad and yet funny too all at the same time.

Everyone takes a turn on the Merry-Go-Round

I really liked this book it surprised me. Well written and a very believable tale of guys growing up in a time period long past.