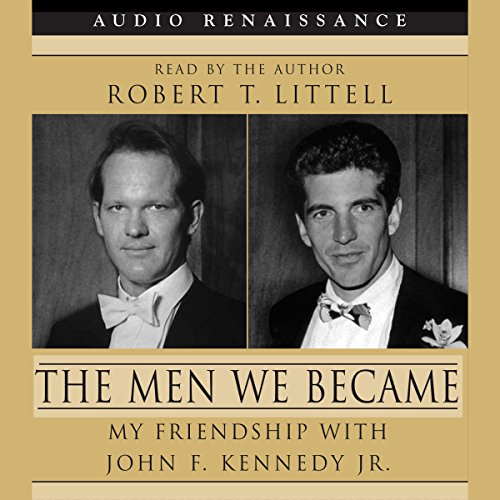 The Men We Became

From youth to adulthood, Rob Littell spent 20 years alongside John F. Kennedy Jr. - through laughter and sorrow, joy and heartbreak. In this moving and poignant memoir of their touching friendship, Rob Littell himself shares his story with listeners.

Rob Littell was a freshman at Brown when he met JFK Jr. Although Littell came from a privileged background, it was worlds apart from the glamorous life of the son of the late president and Jacqueline Kennedy Onassis. Eager to be accepted on his own terms, Kennedy responded to Littell’s irreverence toward his celebrity, and they became close friends.

Littell recounts dinners at Jacqueline Onassis’s apartment - where she surprised him with his favorite of specially burned hamburger - and weekends at her retreat in Martha’s Vineyard, where she critiqued their touch football. As students, Littell and Kennedy bummed around Europe. Later, they shared apartments in New York. Later still, Littell was part of John’s secret wedding to Carolyn Bessette on Cumberland Island, Georgia - and three years later a pallbearer at his funeral.

This is an intimate, detailed and affectionate memoir of an unusual young man by a close friend.

What listeners say about The Men We Became

A useful piece of history

Littell is a good writer and knows how to keep a story moving. His short book adds personal and otherwise unavailable historical information about an American celebrity who had his long term eye on the presidency but whose life was unexpectedly cut short. It is not a page turner but provides a unique perspective from a close and observant friend.

What was one of the most memorable moments of The Men We Became?

Did The Men We Became inspire you to do anything?

JFK JR’s friends make him sound so boring. This is the third memoir I read about him.

I enjoyed this book. It was kind, thoughtful, and reflective- just as its subject was. Compared to “Forever Young,” by Billy Noonan- this book was so much better. We didn’t learn anything salacious about john or carolyn because there was nothing so bad or unusual about them. A good read overall.

It was a very revealing book regarding JFK Jr. as it was written by his close friend, who knew a lot about him.

Memories of a Life Cut Short

This is a bittersweet memoir of Rob Littell's 20 year friendship with John F Kennedy Jr, bittersweet because John, his wife Carolyn and her sister Lauren were tragically killed in a plane crash in 1999. John comes across as a very kind, down to earth guy who cared plenty about his friends and everyone else he knew in his short life. The author is surprisingly astute, and discusses John's relationship with fame, his mother, and complex family with a clear eyed perspective. There are many fun and light hearted stories of the two growing up, and I found myself laughing out loud a few times. Obviously these stories are tinted with tragedy, but it was a lovely book all the same. A very kind and fitting tribute to a man who wanted to be more than an extension of his father's legacy, but a good man by his own merit.