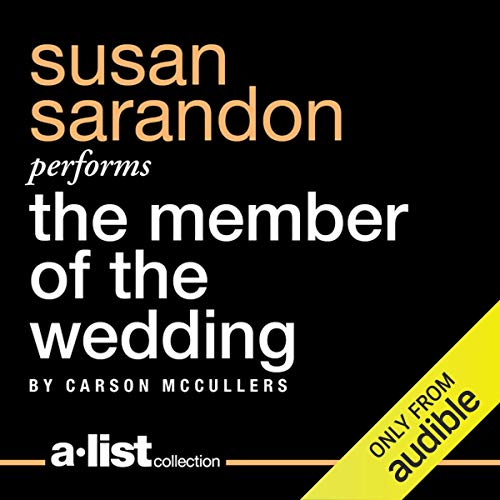 The Member of the Wedding

By: Carson McCullers
Narrated by: Susan Sarandon
Try for $0.00

The best way to experience this classic of the American South is by joining five-time Academy Award nominee and Best Actress winner Susan Sarandon (Dead Man Walking, Thelma & Louise) as she guides the listener on a journey through the anguish of adolescence and isolation.

"Rarely has emotional turbulence been so delicately conveyed," said The New York Times of Carson McCullers' sensitive portrayal of Frankie Addams, a disconnected 12-year-old whose only friends are her family’s maid and a six-year-old cousin. Desperate to be part of something big, she takes an overlarge interest in her brother’s wedding and dreams of following the couple on their honeymoon to the Alaskan wilderness. But as Frankie crosses into adulthood, she experiences the fantasy-shattering disillusionment that must come with it.

This is a story for anybody who’s ever felt like an outsider and a natural fit for Ms. Sarandon, a master at creating authentic, sympathetic characters.

What listeners say about The Member of the Wedding

Yes, a gem! Why I found it amazing and thus worth five stars is explained below in the partial review.

I will only add here a bit about the book's setting: Georgia, 1944-45. You see the world through the eyes of 12 year old Frankie, or F. Jasmine Addams. SHE, not I, will explain to you why she appropriated this name. Not only do you see the emotional turmoil of a preteen but you also get the racial tensions in the South and the tension created by the War. We know it is 1944 from the simple line that "Patton is driving the Germans out of France". One line and so much is said. No long discourses on history.

Do you remember when you were caught between being a child and an adult and belonging nowhere? Alone....and the world is a scary place.

The narration is fantastic; it is read slowly, with feeling, and it is easy to follow. Wonderful Southern dialect.


After part two of three OR after three fourths of a 6 hour audiobook:

Lend me your ear for a moment please. I consider myself pretty hard to please. For this reason I tend to prefer non-fiction because then I tell myself I will at least learn something if the writing disappoints, if the story fails. But the most stupendous books are those of fiction where the writers create a marvelous gem all from NOTHING. They create a tale from assorted words and how they string them together, their imagination and their ability to capture human emotions that we all share. So when I run into astoundingly beautiful writing, and by that I do not mean "pretty" but rather writing that speaks to us all, that has the ability to to pull us out of our own existence and allows us to share common experiences and emotions, now that is something else. THAT is what Carson McCullers does in this book. Fantastic writing.

Do you remember your preteens, when you didn't feel comfortable in your own skin, when the whole world changed over night and all was frightening? Physical changes and emotional changes that throw you off balance. Do you really remember that period in your life? Here it is again captured in writing.

Don't read this. Listen to it narrated by Susan Sarandon. Stunning performance.

Yep, I have listened to " The Heart is a Lonely Hunter". This is even better!

A place most 12 year olds find themselves

An interesting insight into the South through the eyes of 12 year old Frankie. She is desperate to escape a world where she doesn't fit in. Susan Sarandon's narration was excellent.

Wonderful, well written and insightful novel by Carson McCullers, narrated well by Susan Sarandon who gives life to this tale of Frankie Addams who finds herself in love with her brother and his bride's wedding one long, hot summer.

Gorgeous depiction of girlhood, growing up and loneliness

Not particularly plot driven but beautifully evocative and poignant writing. Susan Sarandon is the perfect narrator.

Wonderful coming of age novel, expertly read by the admirable Susan Sarandon who captures the Southern accents so well. Marred by the unnecessary and inappropriate introductiry music - better just skip it and start from the good stuff.

This story is so unique; I immediately want to go back and listen again and I’m also going to order the physical copy.

McCuller’s genius is in how she seems to write so simply, yet convey deep and complex feeling.

The book is a little surreal and does not follow the usual structures but almost like in a dream, time slows down and speeds up.

Sarandon’s narration is faultless and matches the writing perfectly