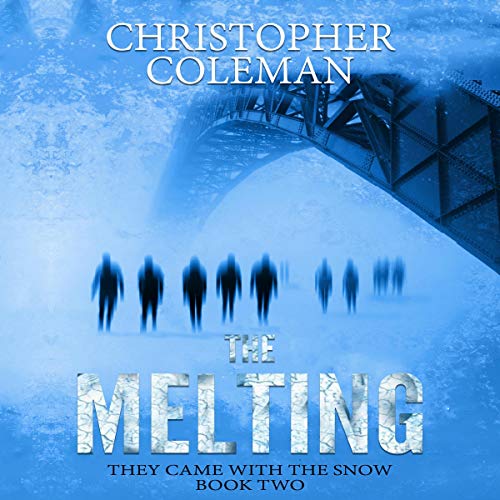 By: Christopher Coleman
Narrated by: Terry Murtha
Try for $0.00

The quest is no longer just to survive, it's to escape.

The snow is melting, and the crabs are growing more violent.

At the base of a blocked-off bridge spanning the South River, Dominic and his friends plan a daunting journey to flee Warren County and the monsters that came when the snow fell.

But the crabs aren't the only danger they face.

There are other forces at work, forces with a secret as inhuman and terrifying as the crabs themselves.

And these forces are determined to never let the group leave.

What listeners say about The Melting: A Science Fiction Horror Post-Apocalyptic Survival Thriller

The story was “ok” but the narration was so monotone. The worst part was the editing & splicing often over lapped or repeated-not once or twice but several times all throughout the production.
Story concept was good but lacked depth of characters. Seems like an inexperienced writer or he was in a rush to finish the work. I had high hopes because the first in the series “They came with the snow” had so much potential.

This could have been an excellent book however there was absolutely no attempt made at editing or even rereading the narrators work. Great voice but mispronounced words, and constant repetition of sentences. I was given the impression that the narrator just assumed that the editor, whoever that wasn’t, would delete the repeated sentence. The author has some great story ideas but has a lot of growing to do on putting a book together. Painfully disappointing.

Please save your time

To start with the Narrator drags the story along, doesn't even attempt character voices, and you can hear alot of ambient noise in the background.

Perhaps I missed the plot but this "zombie" style book has Breen done quite a bit.

The characters are one dimensional and even while supposedly emotional don't seen real.

This is probably the least put together story regarding a world ending scenario and people supposedly sticking together.

I still gave this 4 stars because I enjoyed both the narration and writing. So much so that it was enough to overlook the poor editing. Most books can't draw me in as much as this short series did. I think that's why I found I could overlook the editing mistakes. The writing was on point as was the narration. As for lack of voices, I find some narrators are great at multiple voices and some aren't. What separates the great narrators from bad isn't the number of unique voices, but how they narrate the story and handle other characters. Terry nails this and it shows. If you enjoy solid horror stories this is definitely the book for you.

I have listened to hundreds of audio books and this has to to be the worst for having repeated words, phrases, and sentences. So much so, that you are unable to get truly interested in the story. I just needed a quick fun read for a trip unfortunately this wasn’t it.

The author has written another superb novel! The characters are superb! The narration is great if you don't count the repeat of several sentences!

I gave up an hour in. The story seemed promising, but is ruined by the lazy performance and terrible recording. The narrator didn’t even try, and the recording/editing staff are either stoned or just didn’t give a sh*t. I gave the story 2 stars because Audible requires a “Story” rating, but I honestly have no clue how this turns out and honestly don’t care to try the print version. The fact that Coleman approved this representation of his story is enough to make it a pass for me on all formats.