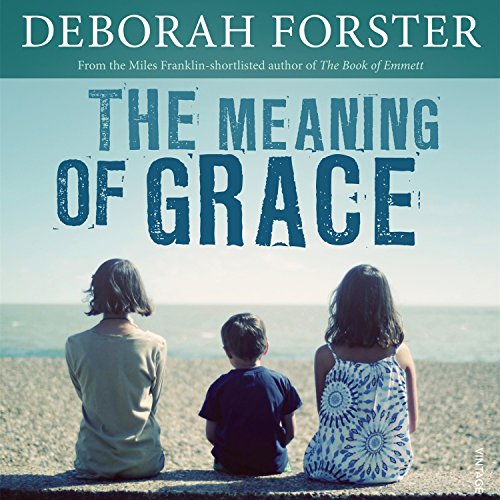 The Meaning of Grace

By: Deborah Forster
Narrated by: Cat Gould
Try for $0.00

"Mum is the reference point. If you ever get confused about anything, there she is, waiting with all her knowledge of you."

Grace Fisher, mother of three, one day decides her husband is a sore disappointment and moves the family from Melbourne to a coastal village in Victoria. But Ian's slow dissolution on the couch masked a depression that will harrow him into an early grave, leaving the kids with a lifetime of questioning: What happened to their father? How did he get so sad? Between their father's demise and Grace's hardscrabble existence working at a local bakery, each child is left to find meaning on their own.

Edie, the eldest child, locks herself into a romantic ideal so lofty that it can't help but fail. The middle child, Juliet, struts and careens through life, filling it only with what she can seduce, steal, and manipulate. Sibling rivalry between sisters proves the slowest and fiercest of burns. Love comes easily for Ted, the youngest, but when his wife abandons him to raise two daughters on his own, the perils of fatherhood are laid bare. When Grace, the distant, imperfect hub of the family, is diagnosed with terminal cancer, the siblings are forced to confront each other as adults, and come to understand their mother.

Written with her hallmark warmth, humour, and deftness of observation, Deborah Forster's follow-up novel to the Miles Franklin shortlisted The Book of Emmett is a moving story of the loves and rivalries that burn at the heart of every family, and the meaning that comes from it.

What listeners say about The Meaning of Grace