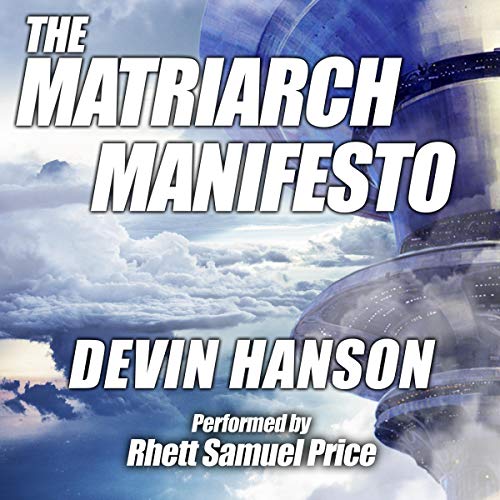 By: Devin Hanson
Narrated by: Rhett Samuel Price
Try for $0.00

On Venus, the Council of Matriarch rules. The society of immortals govern themselves with the iron guidelines of the Manifesto, but the rest of the population is not so controlled.

Among the floating cities in the upper atmosphere, living space is at a premium. Among the working-class citizens, life is a grind of day-in and day-out drudgery, with nothing to look forward to but the inevitability of old age and death. Jackson Harding time-shares a bunk in a communal dormitory, his only dream is to someday afford a room of his own. A new opportunity at work might give him the opening he longs for, if he can survive the dangerous work environment long enough to capitalize on it.

The tensions among the desperate workers are growing to near-riot proportions, but for the matriarchs and their immortal sons, life continues as normal. The daughter of an immortal, Leila Everard is about to have her own coming of age ceremony, where if everything goes well, she will join the matriarchs with her mother.

An accident sparks a chain of events that drag the orderly, structured life of the matriarchs into the grimy desperation of the common citizens. In this riveting sequel to The December Protocol, nobody is safe. The promise of a life everlasting means nothing if you can't survive until tomorrow.

What listeners say about The Matriarch Manifesto

Such a good book! All books by Devin Hanson and this is no exception! Wonderful all the way around, of course, with my favorite narrator!! Wonder if there will be another book within this universe...

The Matriarch Manifesto takes place on Venus and is completely different from how life is on Mars in the December Protocol! The secret to long life on Venus isn't as barbaric. But life is a bit tougher on Venus. The people of Venus live in floating cities in the clouds. Living space can get a bit cramped!

I do think this book is fine as a stand alone, but still recommend The December Protocol as well so you have the full story.

Excellent narration by Rhett Samuel Price! He always does a fantastic job with all the different character voices!

ready for the next

was a predictable story but fun none the less. the expansion of the world is great life on Mars is so different. now I wonder if we will get a story on earth.

Immortality through the Matriarchs

Note: Even though this is Book 2 in the series, it works just fine as a stand alone. In fact, Book 2 has a whole new location and cast of characters.

Book 1, The December Protocol, was good. It held my attention all the way through. Yet I like this book even a little more. It’s certainly different. Book 1 was set on Mars with a detective hunting down missing young ladies, knowing that several had been murdered recently. Here are Venus, the Matriarchs rules supreme and the Have-Nots are tired of it. And I can’t blame them fully – I would be tired of eating yeast cake for every meal too.

Leila Everard has the greatest character growth. She’s a privileged young lady who thinks she’s ready for everything life has to throw at her, including her test to become a Matriarch herself. Meanwhile, Jackson has recently been hired onto a maintenance crew does everything needed to maintain their Venus habitat. A lot of that work is dangerous and done in full atmosphere suits that can protect against the dangerous acidic atmosphere of Venus. Their lives get tangled together when the unthinkable happens: some idiot decides kidnapping a Matriarch or two (Lola and Cynthia) will give them better quality lives. Ha!

I love how the background is seamlessly woven into the narrative of action and character building. I never felt trapped in an info dump nor did I get battle fatigue. The characters are clever and realistic. Both Leila and Jackson are young and they only know what they know, but they each put that knowledge to good use.

As a biologist, I would have enjoyed a bit more on the science of near immortality and why family groups must rely on specific unfertilized human eggs for their rejuvenation treatments. After all, we can get stem cells from several human tissues these days, including fat, bone marrow, gut, etc. But if you don’t care to question the underlying science, it’s a great thriller. 4.5/5 stars.

The Narration: Rhett Samuel Price gave a very engaging performance. His female voices are believable & all characters have distinct voices. While I loved he went the extra mile to make characters sound like they were wearing masks when needed, there were a few sentences that were a little hard to understand. Price is great with all the emotions in the story too. I felt he was fully engaged in the tale as well, his own excitement for the story coming through. There were no technical issues with this recording. 4.75/5 stars.

I received this audiobook as part of my participation in a blog tour with Audiobookworm Promotions. The tour is being sponsored by Rhett Samuel Price. The gifting of this audiobook did not affect my opinion of it.