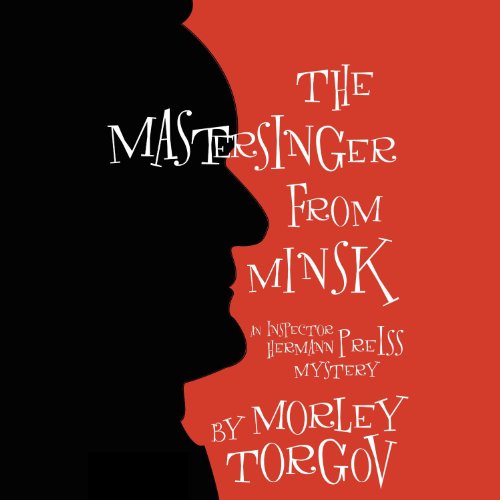 By: Morley Torgov
Narrated by: Jason Culp
Try for $0.00

It is late March 1868. In Munich, composer Richard Wagner is completing his new opera Die Meistersinger von Nuremberg. It has been a difficult few years for him, and much depends upon the success of this new work. Following the tense auditions, an anonymous note warns Wagner that the premiere will be the date of his ruination.

Enter Inspector Hermann Preiss, who discovers a complication. Her name is Cornelia Vanderhoute, and she claims to have been made pregnant after a typical, brief Wagner fling. A series of murders of people involved in the new production suggests Cornelia is carrying out a deadly program of revenge.

Even Wagner and his wife are threatened. Will Preiss succeed in discovering the writer of the note? Will he manage to prevent the murder of Wagner, and what will happen on the night of the premiere?

What listeners say about The Mastersinger from Minsk

I found this gem of a novel as I was ravaging the internet for any fictional source about Richard Wagner - as in he as a character in a story. There are surprisingly only a couple novels which I have found which include Richard as such, including another larger but rare novel about Wagner and his first wife Minna called “Seasons with the Meistersinger”. There are of course at least 100 or more nonfiction and primary sources on Wagner aplenty. I truly appreciated this mystery, enjoyed its audiobook narrator (who delivered each character and voice very convincingly), and liked the twist ending as well. The author’s main character is sympathetic, and his characterization of Wagner himself was accurate. It’s not too long for a murder mystery (granted I prefer historical fiction, not detective books), so therefore if you want something to read related to Wagner, easy to follow, yet intriguing in its own sense, I give this book a thumbs up for Wagnerians! :)

This could have been a good book, but it isn't. It has an excellent plot. The plot is great but the way the writer presents it, is tedious beyond belief.

The books goes off on tangents. At a dinner table, the most minute and trivial conversation is presented in detail, even when it has nothing to do with the story. The author includes quite a lot of detail about music and composers of the era which may not be to everyone's taste. For every little incident, it seems we get a long back story. And most tedious of all we are treated to the detective, Preiss, thoughts at great lengths and to his private life and loves at even great length. I got really sick of Preiss and his girl friend - they took up too much time in the book.

The narrator was not bad, but he had such poor material to work with, that at time he just seemed to drone on.