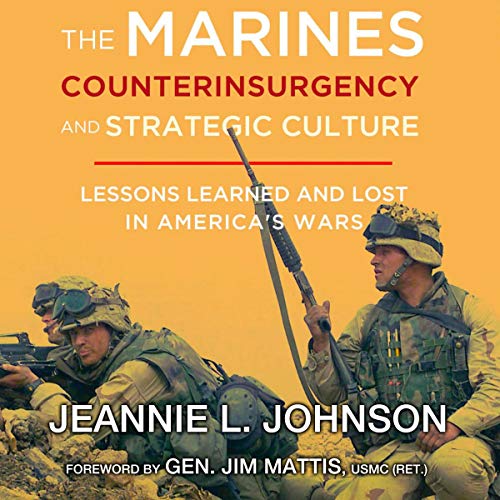 The Marines, Counterinsurgency, and Strategic Culture

Jeannie L. Johnson takes a sympathetic but critical look at the Marine Corps's long experience with counterinsurgency warfare. Which counterinsurgency lessons have been learned and retained for next time and which have been abandoned to history is a story of battlefield trial and error - but also a story of cultural collisions.

The audiobook begins with a fascinating and penetrating look inside the culture of the Marine Corps through research in primary sources, including Marine oral histories, and interviews with Marines. Johnson explores what makes this branch of the military distinct: Their identity, norms, values, and perceptual lens. She then traces the history of the Marines' counterinsurgency experience from the expeditionary missions of the early 20th century, through the Vietnam War, and finally to the Iraq War. Her findings break new ground in strategic culture by introducing a methodology that was pioneered in the intelligence community to forecast behavior. Johnson shows that even a service as self-aware and dedicated to innovation as the Marine Corps is constrained in the lessons-learned process by its own internal predispositions, by the wider US military culture, and by national preferences. This is a must-listen for anyone interested in the Marines Corps, counterinsurgency warfare, military innovation, or strategic culture.

"An essential read for anybody interested in military culture and modern conflict." (Theo Farrell, University of London)

"A wonderful book about America's premier war-fighting organization, the US Marine Corps. The book is so well written it may be in danger of being categorized as readable social science." (Colin S. Gray, University of Reading)

What listeners say about The Marines, Counterinsurgency, and Strategic Culture