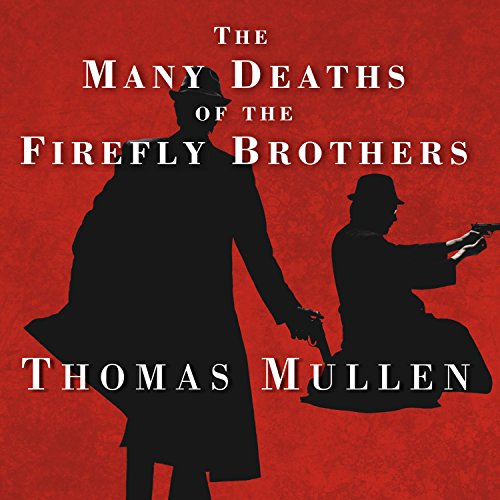 The Many Deaths of the Firefly Brothers

By: Thomas Mullen
Narrated by: William Dufris
Try for $0.00

Late one night in August 1934, following a yearlong spree of bank robberies across the Midwest, Jason and Whit Fireson are forced into a police shootout and die for the first time. Now it appears that the bank robbers known as the Firefly Brothers by an admiring public have at last met their end in a hail of bullets.

Jason and Whit's lovers---Darcy, a wealthy socialite, and Veronica, a hardened survivor---struggle between grief and an unyielding belief that the Firesons have survived. While they and the Firesons' stunned mother and straight-arrow third son wade through conflicting police reports and press accounts, wild rumors spread that the bandits are still at large. Through it all, the Firefly Brothers remain as charismatic, unflappable, and as mythical as the American Dream itself, racing to find the women they love and make sense of a world in which all has come unmoored.

Complete with kidnappings and gangsters, heiresses and speakeasies, The Many Deaths of the Firefly Brothers is an imaginative and spirited saga about what happens when you are hopelessly outgunned---and a masterly tale of hardship, redemption, and love that transcends death.

“Mullen makes the despair of the Great Depression palpable, as his antiheroes become folk icons to the downtrodden people of the Midwest resentful of a government that can't help them.” (Publishers Weekly Starred Review)

What listeners say about The Many Deaths of the Firefly Brothers

A very interesting story. One must have a good I

idea on how to navigate the a.mystery series and find out the answers to the questions presented in the book .
Something are not really what you.think and.you are leaf wording how the story will
end. But you must prevail to the end for a final conclusion .Or you will not have a chance of being able to see the results.

Not bad not great

This was an ok read, but I kind of wish I had spent my time on a different book. It just never really grabbed me, and most of the book's revelations you'll spot coming. Also I won't say it ruined the book for me, but the author never really offers any kind of explanation for the brothers' multiple resurrections. It wouldn't be a problem except that there is exactly one other random character who experiences the same thing for no discernible reason. Anyway, this is not a terrible book or anything. I would just say that there are many better and more satisfying options available from audible.