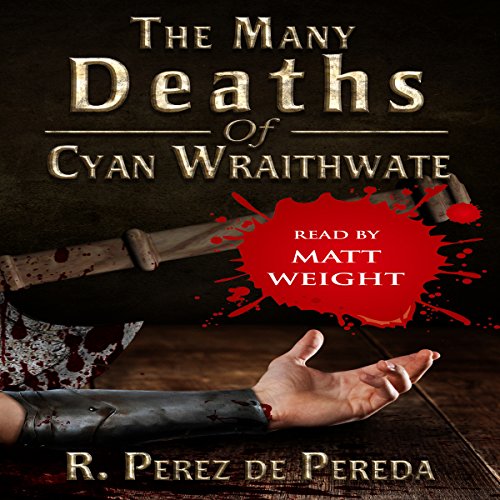 The good part about being immortal is that you cannot die. That is also the bad part.

Brash, young, and markedly sociopathic, Cyan has the makings of a full army commander if he lives long enough to be promoted. But when a close brush with death breaks his resolve, he is rendered unable to lead his men, let alone leave his tent, for weeks.

The tide starts to turn when his superiors send him a magical artifact that ensures he will not die on the battlefield. Unfortunately for Cyan, he soon learns that not dying can be worse than not living - a side effect of the artifact's magic turns more of his body to lifeless iron with each passing day. Knowing time is short before he becomes just another statue in a town square, he sets off on a quest to rid himself of his cursed immortality.

What listeners say about The Many Deaths of Cyan Wraithwate

The jerk we love to hate, and one we hate to love

If you could sum up The Many Deaths of Cyan Wraithwate in three words, what would they be?

Cyan Wraithwate. He's the jerk we love to hate, and one we hate to love. He's got a big axe, poor impulse control, and a twisted penchant for manipulating people. He's fun to watch in action.

Matt Weight is a natural storyteller. His uniquely snarky delivery gives the book the feel of a Quentin Tarantino film. When the blood flies and the tension's high, he drills down every gritty detail. And his sarcastic deadpan has to be heard to be believed. Any way you slice it, Mr. Weight's performance will delight, amuse, and amaze.

The action sequences were flashy and intense, and perfectly narrated. The author's dark sense of humor will make you chuckle and cringe at the same time.

"The Many Deaths of Cyan Wraithwate" is an exceptional dark fantasy.

A Machiavellian Conan that cannot die

I'll be honest, I sqw the cover and the tilte to this book and I immediately thought I had to see what it was all about. The title alone was more than enough to pique my interest, and the cover cemented that desire. Look at it, that is probably one of the best hack and slash covers I have ever seen. I don't need a Death Dealer or Conan to sell me a story, the hand and the blood splatter was more than enough. It told me that this was a nuanced tale, and dang if I wasn't right on that aspect.

The main character is not your average barbarian lout. Actually, he's like nothig you would expect. Cyan isn't a hero by any stretch. He manipulates and coerces others, he's a madman with an axe, personally he's a bit of jerk, and if I had to guess from his lack of self control I'd say he suffers from intermittent explosive disorder. He's not in this game to help others, he is looking out for number one, and his problem is that he can't die. Well, that isn't the problem, the problem is that he is slowly transforming into a nice chunk of iron and in order to stop the process he has to . . .well. . . I'm not gonna say.

I will say that the book is an epic fantasy filled to the brim with violence, and by that I mean Vi-OH!-lence. It is brutal. There is a reason axe murderers are so feared, and when this axe swings heads will roll, body parts will fly, and rivers of blood will run. The humor is so dark it might actually absorb light, but it is funny. Poor Cyan also manages to die in a myriad of ways that never fail to entertain. I have to say that Pereda writes the action scenes as if it were a movie scripted by Tarantino and directed by Coppola, and starring a time traveling Ghengis Khan; they are realistic, gory, and so soaked in blood that I'm glad I got the audible version because if this was paper I'd have to wring it out in order to continue.

Since I'm talking about the audible part of this book I have to say that Weight does a freaking incredible job. He has enough snark, bravado, and charm to make you wish he had a few more hours to narrate. I did some checking and he's narrated a ton, a TON, of books, so he has certainly learned how to tell you a tale, how to pace it, how to infuse it with emotion, and actually cheer on a character that you would absolutely hate if you met them in real life.

To wrap it up, this is a rare top of the line novel that you hardly find anymore. Honestly, it feels like it comes from another era. The writing has an Old School feel to it, but manages to remain modern and relevant to readers who are used to getting everything in sound bites. The four hour run time is just perfect. It tells a complete story, and leaves you breathing hard once it is all over. I would love to see more from this author, and have already found a few more books that Weight has narrated that I will be looking into. This is most certainly a story any fan of high fantasy or just plain old hack'n slash adventure will love. It is both brutal and cerebral. Something you hardly ever find nowadays. Even though I did receive a promo code for this review it in no way influenced my considerations of the material, and in fact, inspired me to be more honest. Getting a code generally makes me harsher as a reviewer as I am more often concerned what someone like Me will decide based on my review.

Edgy dark fantasy with a twist!

I loved the action sequences, and there were many of them! And also the ways in which the protagonist dies, and comes right back. All the action aside, the story is very good too. Mr. Weight, the narrator, did a fantastic job throughout.

Cyan, the main character. He's a jerk and he's hard to like as a person, but he's fun to watch in action.

What does Matt Weight bring to the story that you wouldn’t experience if you just read the book?

Mr. Weight's voice acting was fantastic. I love the way he voices the main character, Cyan. He makes him sound like a mercenary jerk, which Cyan is.

The final twist at the end.

I really enjoyed this book and the voice acting.

As the old adage goes, "be careful what you wish for." Cyan learns much too late that the immortality he so eagerly accepted as a blessing turns out to be a curse. With each passing day, more of his body turns into lifeless iron. He sets out on a desperate race against time to save his skin, and possibly even his soul too, along the way.

What struck me about the book is that the writing is "different." I couldn't put my finger on it at first, but later I learned that the book is actually very old, the author having written it in the 1960's. As a result, the plot, pace, and author's choice of words aren't like our contemporary fantasy today; rather, the book reads more like fantasy novels from decades past, from which the author drew inspiration.

While Cyan is the book's protagonist, that in no way suggests that he is a "good guy." He's selfish, self-absorbed, and has a quick temper, and these personality traits don't win him any friends. As much of a jerk as Cyan is, it's always satisfying to watch the terrible (and some creative) ways he meets his (temporary) end. And by the same token, you wonder if he'll ever learn his lesson and stop being so self-absorbed, if only for his own sake.

Matt Weight's performance as narrator is extraordinary. His narration is direct and engaging. His timing and technique are spot-on. Each character gets a unique voice, perfectly suited and expertly performed. And the irony in his tone fits the book beautifully. It makes for a stellar performance.

Cyan, the main character. He's no hero by any stretch, and is a guy you'll love to hate.

Which character – as performed by Matt Weight – was your favorite?

Cyan, hands down. He's gruff and stubborn, which is a blessing and a curse for Cyan.

The ending. Without giving anything away, the ending was a real twist. I enjoyed how everything came together then.

It's a fun audiobook and a great read.