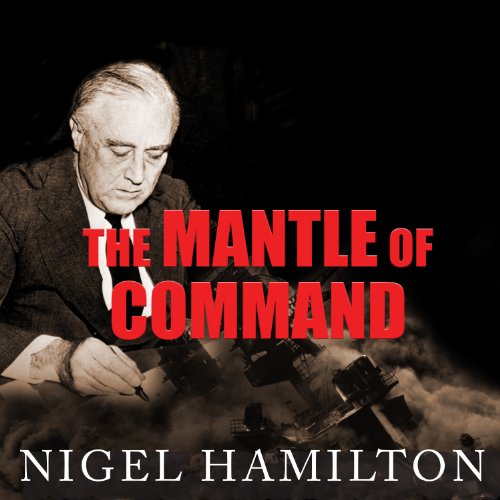 The Mantle of Command

By: Nigel Hamilton
Narrated by: James Langton
Try for $0.00

Based on years of archival research and interviews with the last surviving aides and Roosevelt family members, Nigel Hamilton offers a definitive account of FDR's masterful - and underappreciated - command of the Allied war effort. Hamilton takes listeners inside FDR's White House Oval Study - his personal command center - and into the meetings where he battled with Churchill about strategy and tactics and overrode the near mutinies of his own generals and secretary of war. Time and again, FDR was proven right and his allies and generals were wrong. When the generals wanted to attack the Nazi-fortified coast of France, FDR knew the Allied forces weren't ready. When Churchill insisted his Far East colonies were loyal and would resist the Japanese, Roosevelt knew it was a fantasy. As Hamilton's account reaches its climax with the Torch landings in North Africa, in late 1942, the tide of war turns in the Allies' favor and FDR's genius for psychology and military affairs is clear. This must-listen account is an intimate, sweeping look at a great president in history's greatest conflict.

"This convincingly written and gripping volume is essential for historians, political scientists, and history buffs, for a deeper understanding of the principle of civilian supremacy of the military in the U.S. political system." ( Library Journal Starred Review)

What listeners say about The Mantle of Command

Placing Roosevelt a the center of WW2 strategy

I've read a number of books on WWII and they've mostly followed the military perspective. This book clearly places Roosevelt as the decision maker on the US side at the beginning of the war and it describes the early arguments from his side. The book seems well documented with many, perhaps too many, excerpts from letters and diaries.
I felt there was too much repetition leading up to the African landings and then the book suddenly ended. I don't know if the material ran out (FDR was highly secretive) or the military took over control.
From my perspective this is an original and important book. I've picked up a couple of other books on FDR to try to validate some of these conclusions.

Would you listen to The Mantle of Command again? Why?

Yes, but I got more out of reading the text. The combination of both was best.

How powerful is the presidency? When I read this and Commander in Chief, I really understood how powerful is the position of President of the US. FDR was the most powerful man in the world during his war time presidency years. Fortunately he was the right man for the times. His decisions led to the allies march to victory. It is scary to think what would have happened if Churchill had his way. FDR was charismatic, wise, and persuasive. Certainly the marks of a leader.

I always find that a British accent is harder for me to follow closely than American. I frequently missed points and was glad I had the book to read to follow up.

Obviously, you must read Commander in Chief which covers most of 1943. Hopefully, Mr. Hamilton is working on "the rest of the story".

This is a typical British revisionist tome! Absolutely awful! In fact, with 3-hours remaining, I couldn’t choke down anymore of it! Hamilton badmouthed the American Chiefs of Staff and particularly Gen. George Marshall, and that tore it for me.

I high recommend than anyone seriously wanting to learn about Roosevelt and World War II to pass this book by!

Great story telling, as if you're a fly on the wall as history is being made.

Never appreciated fdr more than at this moment in us history. Superb performance and very clear treAtment of complex historical issues.

The author adds little to our understanding of Roosevelt's thoughts or style of command. He spends far too much of the book simply castigating Winston Churchill for the failures of British arms while at the same time ensuring that America's disasters of December 1941 are laid on the military commanders. For readers interested in criticism of Churchill there are better sources.

Worth reading if you like WWII history that's fresh--not retread myth or legend. This delves in FDR's role as a military-political strategist.

Excellent book about FDR at war and the decisions he made to defeat the axis powers. The amount of detail is fantastic.

Excellent in Every Way!

This book is excellent in every way! The research and scholarship are first-rate. Diary and memoranda excerpts are deftly used. The historical record as created largely by Churchill is rightly corrected and supplemented, but it is done in a way that does not diminish one's awe and respect for that great man. The pro-FDR perspective and thesis are original, provocative, and well-supported. Roosevelt's brilliant strategic vision, executive leadership style, political skill, strength of purpose, people skills, and humanity are wonderfully captured and presented. The narrative, organization, and pacing are perfect. The chronology of the war's first stage is conveyed in a way that lets the reader really understand the relationship and sequencing of events. Moments and scenes are painted vividly, believably, and often very powerfully. The personalities of key figures come through clearly and realistically without long digressions from the central story. The reader is a perfect match for the story and text and never distracts from or intrudes on them. I look forward to enjoying and learning from the second and third volumes of this trilogy.

This first part of a trilogy offers an over the shoulder view of FDR’s conduct of the United States at War, starting with the pre-war year and ending after the invasion of North Africa. It is rich with detail and anecdote. It seems as close to an autobiography as is possible. Thank goodness for Roosevelt’s diaries. If you want a sense of what it is like as the Commander in Chief in our form of government, this is it. It took a strong leader with a vision for the future of our world to captain our ship and herd the cats to get it done.