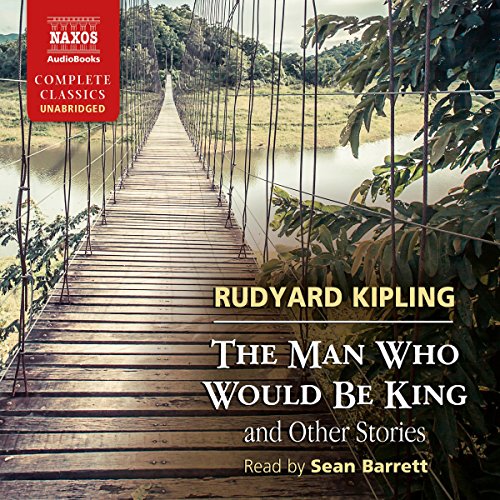 The Man Who Would Be King and Other Stories

By: Rudyard Kipling
Narrated by: Sean Barrett
Try for $0.00

In a remote part of 19th-century Afghanistan, two British adventurers pursue their ambition to rule an empire. Using betrayal, threats, and guns, they win the respect of a primitive tribe and become worshipped as gods until one day they draw blood, and the game is up. "The Man Who Would Be King" is an action-packed tale about the pitfalls of colonialism and the temptations and evils of power. This volume also includes the stories "The Phantom Rickshaw", "The Strange Ride of Morrowbie Jukes", "The Mark of the Beast" and many more.

Varied Stories about Love, Life & Death in the Raj

The Naxos The Man Who Would Be King collects 12 Kipling short stories originally published between 1885 and 1890. The tales are varied in quality, mood, and genre. A few are classic, a few forgettable, the rest strong. There are two adventure stories (one brutal, one surreal), two ghost stories (one straight, one comedic), three supernatural stories (one straight, two comedic), three romance stories (one comedic, one tragic, one political), and two boy stories (one comedic, one excruciating). They are unified by Kipling's authentic depiction of life in the Raj (British Empire in India); by his criticism of and sympathy for the Anglo rulers and their indigenous subjects; by his ability to write compelling stories, characters, and settings that reveal the human condition; by his first-person narrators and nested narratives; and by his concise, dynamic, and flexible style.

1. The Man Who Would Be King (1888)
Two British con man "loafers" plan to become kings in Kafiristan, a mysterious, mountainous corner of Afghanistan, by smuggling in guns and training the locals in soldiery, agriculture, and infrastructure. How they succeed and fail makes an absorbing and appalling adventure story that satirizes the ignorant attempts of "superior" civs to force enlightenment on "inferior" ones, not unlike the Raj project.

2. The Phantom Rickshaw (1885/1890)
In this morbidly funny and moving psychological study of guilt Jack Pansay comes to see the phantoms of a rickshaw, its coolies, and the woman he wronged as more real than the living people around him. The doctor diagnoses overwork and indigestion, but the narrator figures that "there was a crack in Pansay's head and a little bit of the Dark World came through. . ."

3. My Own True Ghost Story (1888)
The narrator has never experienced any of the many ghosts in India, until he stays the night in a dak-bungalow. Convinced he's heard a spectral billiard game in the next room he's planning to write a ghost story with which to paralyze the British Empire-- until he takes a peek into the room.

4. The Strange Ride of Morrowbie Jukes (1885)
After riding out into the desert to kill a wild dog, feverish engineer Morrowbie Jukes comes to his senses in a sandy crater. He finds himself among dozens of skeletal and smelly Indians dumped there after failing to die from fatal diseases. Rather than give Jukes his due respect as a white Sahib, the living dead laugh at or ignore him, and one ex-Brahmin even tries to master him. There is no escape from the pit. The vivid details and surreal horror--existence pared down to eating roast crow--prefigure Kafka or Kobo Abe.

5. The Mark of the Beast (1890)
"The gods of the heathen are stone and brass, and any attempt to deal with them otherwise is justly condemned." Everything in this story contradicts that sentiment, after a drunken Brit stubs his cigar out on the forehead of a statue of the Hindu god Hanuman and starts behaving bestially. A doctor diagnoses hydrophobia, but the narrator and the policeman Strickland suspect the curse of a leper priest.

6. Without Benefit of Clergy (1890)
John Holden is a British bachelor civil servant in India by day, an unsanctioned husband of a 16-year-old Muslim Indian girl by night. When Ameera bears a son, the couple experiences "absolute happiness," but "The delight of that life was too perfect to endure." There is great beauty, love, and pain in the story: "It was not like this when we counted the stars."

7. The Sending of Dana Da (1888)
Kipling mocks Anglo theosophy and spiritualist religious types via a mysterious (con) man's supernatural "sending" of kittens to an ailurophobic foe of the narrator.

8. Wee Willie Winkie (1888)
The 6-year-old son of the regimental colonel follows the foolish fiancé of Lt. Coppy across a verboten dried riverbed into Afghanistan, the land of the "Bad Men" ("goblins"). His little boy-talk is almost too cute (e.g., "Vis is a bad place, and I've bwoken my awwest"), his awareness that he is the "child of the dominant race" repugnant. And the bandits know that if they harm the captives, the British regiment ("devils") "will fire and rape and plunder for a month till nothing remains."

9. On the City Wall (1889)
A prostitute, her admirer, a political prisoner, a Muslim festival in a Hindu part of Lahore, and the narrator's perceptions of all those. Love, faith, India, changing times, and the difficulty (and hypocrisy) of British Raj rule. This is a great story: funny, ironic, sensual, romantic, political, and moving.

10. The Education of Otis Yeere (1888)
In this comedy of manners, Mrs. Hauksbee feels empty and wants power, so she applies all her formidable strategy and style to make a man. She molds boring Otis Yeere, whose career in the Raj is going nowhere, into a smart Man on the Rise. With its many Wildean lines (e.g., "A man is never so happy as when he is talking about himself"), the story is funny, but Otis' broken heart and Mrs. Hauksbee's ego sting.

11. The Judgment of Dungara (1888)
When a well-meaning but ignorant German missionary husband and wife succeed too well in converting the Buria Kol, a nude and lazy folk who worship a God called Dungara, the sly priest of Dungara takes action.

12. Baa Baa Black Sheep (1888)
This fictional account of the experience of Kipling and his sister uproots 5-year-old Punch and 3-year-old Judy from their idyllic lives with their parents in Bombay and inserts them for five years into the Dickensian hell of Downe Lodge in England.

The reader of the audiobook, Sean Barrett, greatly enhances the stories, handling the many characters--young or old, male or female, British or Indian, sane or mad--all just right.

If you've read Kipling's Plain Tales from the Hills, you know what to expect here, though the stories in this collection are longer and fewer. Both sets of stories provide a vision of British rule in India (and of "civilized" rule of "uncivilized" peoples anywhere) more complex than merely, "Kipling was an imperial apologist." His humane interest in all kinds of people--from prostitutes to priests, from 6-year-old British Colonel's sons to aged Sikh revolutionaries--shines through.

Worth a Second Read

Where does The Man Who Would Be King and Other Stories rank among all the audiobooks you’ve listened to so far?

The Man Who Would Be King and Other Stories is among the best short story collections I have listened to so far. The stories were so condensed and crafted that I listened to the book back-to-back to pick up all of the nuances of details I had missed in my first reading.

What other book might you compare The Man Who Would Be King and Other Stories to and why?

I would compare The Man who Would Be King and Other Stories to Ray Bradbury's collections, because they were both great storytellers. However, Kipling's focus on India during the height of British colonial empire lends his stories the air of the exotic and the political.

Sean Barrett performed the hundreds of characters with craft and creativity, especially women, children, soldiers, Muslims, Hindus, and Sikhs. There were many castes and classes of characters he had to voice over a broad range of Anglo-Indian society at that time. When I heard Barrett, I heard India.

If you could take any character from The Man Who Would Be King and Other Stories out to dinner, who would it be and why?

If I could talk any character from The Man Who Would Be King and Other Stories out to dinner, I would take Kipling himself. He had served as a reporter and correspondent in India. Any reporter and correspondent that served in his stories represented him, eager to hear stories in this exotic land in a time of conflict. Stories literally walked into the door of this reporter's office. A dinner with him would be fascinating because he would regale me for hours. As a storywriter myself, I would ask him questions about his craft.

Read and listen to Kipling's books. He is an exemplary short story writer and a pioneer of its form.

These are so very well written and performed but overall, the themes are very dark and can be disturbing. The colonial mindset is strange to consider in our current climate but well worth remembering if only to avoid. Highly recommend if you are in the mood for soul searching and a little creepiness but if you are looking for something cheerful, keep looking!

Not as enjoyable as Jungle book - hard stories that teach life lessons. Most of these Kipling stories were just sad or macabre.

A Delightful collection of Kipling short stories. Nicely read. Love the movie with Michael Caine and Sean Connery and was surprised that MWWBK was only a short story not a full novel. Some of the other tales could be adapted for tv if it still had shows like The Twilight Zone or Armchair Theatre. But instead stick on your headphone, listen and be transported to a different world

It's so lovely to listen to stories, such as "Wee Willie Winkie" and "Baa Baa Black Sheep", that I can't help but listen to them again and again.

Excellent performance from Sean Barrett, which gives life, and perhaps more, to the stories, as always; thank you.

I’ve only recently discovered Rudyard Kipling. I had assumed he would be toe curlingly racist & imperialist but although he describes some British attitudes & behaviour from that time he clearly has sympathy & respect for other religions, races etc. His story telling is wondrous. A Different time & place but wisdom & wit. Very evocative. I’ve always loved Somerset Maugham & I’m sure he must have been influenced by Kipling in terms of human emotions & ability to capture an atmosphere.

These were familiar stories, cleverly written and in this format read superbly by Sean Barrett. His voice suited the tales, and he clearly understood Kipling's written words and intentions.
The readings are a joy but I dropped one star for the awkwardness with the PDF. It should surely be possible to align stories with chapters and name them in the chapter listings. But that is a minor flaw in a wonderful performance.

Gripping stories that give insight to life in India under British rule. Makes me wanna know more about Indian tradition and the complexity of being governed by a foreign power.