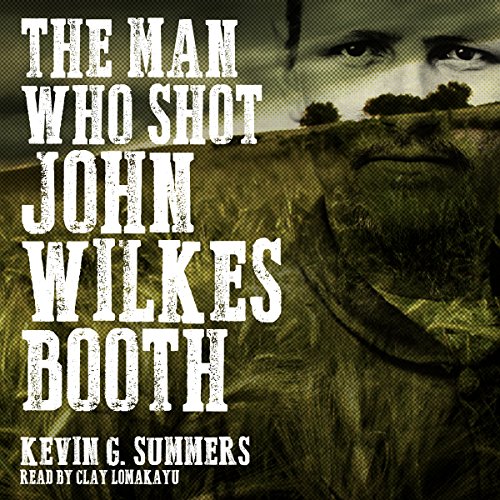 By: Kevin G. Summers
Narrated by: Clay Lomakayu
Free with a 30-day trial

What is truth? For 19 years, Joshua Webb has been asking that question in the pages of his newspaper, The Paradise Ledger. He's been called a madman, a lunatic, and an anarchist, but now he has stumbled upon a story so huge that it could shake the United States to its very foundation. The source of the trouble is Boston Corbett, the man who shot John Wilkes Booth. He claims to possess knowledge of the real perpetrators behind the assassination of Abraham Lincoln, but if his story can be believed, what threat might this hidden truth present to Joshua Webb and the people that he loves?

This is the complete novel that was originally published in three serial installments.

What listeners say about The Man Who Shot John Wilkes Booth

the first time i read this book i was pleasantly surprised. i had the first part of the story sitting in my kindle app for a few months before i decided to read it. i'm not a big western fan but had enjoyed Legendarium so thought i'd give this a try. i loved it and downloaded the full novel. this book will appeal to history buffs, conspiracy theorists, and scifi / fantasy fans as well. this is a great conspiracy theory story; it's a concise, well-written story which did well as an audiobook. there were no awkward pauses by the reader, and the slight drawl in the narrator's accent complimented the story telling atmosphere.

A Conspiratorial Tale of the American West

Anyone who enjoys the spirit of the old west and the intrigue of conspiracy and the paranormal should definitely pick this book up.

What was one of the most memorable moments of The Man Who Shot John Wilkes Booth?

This book punched me in the stomach more than once. I wasn't ready for some of the twists. Kevin Summers isn't afraid to break tropes.

He sounded like he was telling the tale by campfire, just a perfect fit for a western.

Would you listen to The Man Who Shot John Wilkes Booth again? Why?

I would listen again, yes! Kevin Summers has written a compelling conspiracy thriller full of engaging characters in a well-realized fictional frontier town, and it is narrated with panache (and with an appropriately high-noon, saloon-porch drawl) by Clay Lomakayu.

Joshua Webb, editor of the "Pardaise Ledger" and postbellum Fox Mulder. He's searching for the truth in the "shadows at the edges of Paradise," as well as for his own sense of meaning and purpose.

What does Clay Lomakayu bring to the story that you wouldn’t experience if you just read the book?

Lomakayu brings a pleasingly steady pace to the story that makes sure listeners pay attention to every detail Summers has written, even in the faster action sequences. It increases suspense and enjoyment of the story.

Very cool story!
The story was not what I was expecting.
I really did enjoy this story even told friends they must read it.
I just don't know how to describe how good this story is without giving away details!
I really like the Conspiracy aspects of the story it really made the story.
Get is you will enjoy it!

Give this a Listen - And a Read

Narrated by Clay Lomakayu, whose voice seemed to come straight out of "The Old West", I was transported back to the days when Westerns were the MOST exciting thing to watch on television - but I remember few to be as exciting as THIS!Very interesting; enjoyed it tremendously. I wish I could have gotten my ear-piece to work better so I could have listened every time I was in my automobile - NOTHING bad towards this book, just my ear-bud not functioning properly... maybe that's a good thing, I might not have gotten out of the truck every time I reached my destination. (WINK)

Everyone knows that John Wilkes Booth killed Abraham Lincoln, or you should if you actually paid attention in grade school. No one really talks about the man who shot John Wilkes Booth... See what I did there? Summers takes us back in time to 1888 (23 years after Lincoln's assassination) and puts us in the shoes of a small town newspaper editor by the name of Joshua Webb. Webb begins getting these weird letters from a man named Boston Corbett, the man who killed Booth and claims to know the real story behind Lincoln's assassination. Wanting to believe Corbett's story, Webb ventures out to Topeka State Hospital to meet the man behind the letters. Unbeknownst to Webb, Corbett has more planned than just spilling his secrets.What are these secrets and what affect will they have on Webb? His family?

I had the luxury of reading The Man Who Shot John Wilkes Booth in the original format, a trilogy of short novels. When I saw there was an audiobook that combined the serials together, of course I was on board. Summers does a wonderful job here of taking us back in time to tell a story that not many people know. Of course, the covers for the novels state 'Weird Western' and there is definitely a dose of weird. Secret conspiracies and loonies always have their quirks.

Clay Lomakayu has a great voice but I did find myself sort of dozing here and there. Everyone begins to sound the same a few pages in and I found myself losing focus. This doesn't detract from the story but it would be nice to have a little differentiation between the characters.

What did you love best about The Man Who Shot John Wilkes Booth?

I loved the historical tie-in. I love the conspiracy theories. I could feel the emotions and tensions throughout.

Have you listened to any of Clay Lomakayu’s other performances before? How does this one compare?

No. This was good quality.

This is an awesome story! I've never thought about the man who shot John Wilkes Booth. This is a great story about a newspaper editor named Joshua Webb who is searching for the truth about the death of Lincoln's assassin. Thank you for sharing it with us Mr. Summers.

I read the book as it came out in installments and loved it then. The audiobook has made my commute this week bearable. Thank you Mr Summers for a great story and thank you Mr Lomakayu for reading to me!