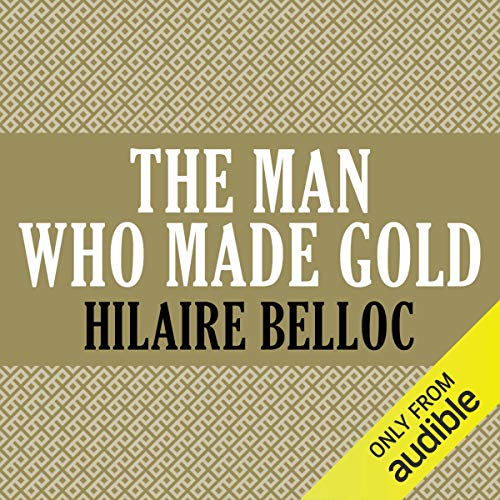 The Man Who Made Gold

The Man Who Made Gold

Professor Charles Lexington led a placid and uneventful life until he made the mistake of discovering a way by which lead could be turned into gold. A Mr. Bowry volunteered to help the Professor capitalize the discovery, and from then on things began to happen. Before Professor Lexington got back to Earth he had been a match seller on the streets of London, an end man in a minstrel show, an inmate of a charitable institution, and a plumber.

Here is just such a combination of insoluble mystery and waggish humor as brought unending delight to readers of Shadowed and the other Chesterbelloc tales in which laughter was crossed with diabolic plot. This tongue-in-cheek puzzler will tickle your funnybone and tax your ingenuity.

Hilaire Belloc (1870-1953) was born in La Celle-Saint-Cloud, France, and raised in England. Educated in Birmingham before voluntarily serving his military term of service in France, Belloc then returned to England to study History at Baliol College, Oxford where he graduated with a First-class degree.

Writing on everything from poetry to war and travel in between, Belloc has been called one of the Big Four of Edwardian Letters, along with H. G.Wells, George Bernard Shaw, and G. K. Chesterton, all of whom debated each other into the 1930s. Belloc was closely associated with Chesterton, and Shaw coined the term Chesterbelloc for their partnership.

A deeply religious Catholic, Belloc wrote considerably about his faith, and throughout his literary career he was concerned with the problems of social reform. He was a political activist and an MP for Salford from 1906 to 1910 for the Liberal party, and his written non-fiction work criticized both capitalism and aspects of socialism.

Fans of Belloc shouldn't miss this one. The great genius delights with his wit and style.

Yes. This is another supremely understated reading of a fine author who can so easily be made to seem pedestrian rather than genuinely insightful to man's soul.

No fuss. No mind-numbing bother. No resort to mere theatrical spectacle, just the story - and one's own mind's eye.

That this far from immediately gripping tale is available, so masterfully read - bringing gently it to life, and, simply, that it is here ..

Thank you Audible! If I could give you a prize for your dedication to the art of audio, I would.