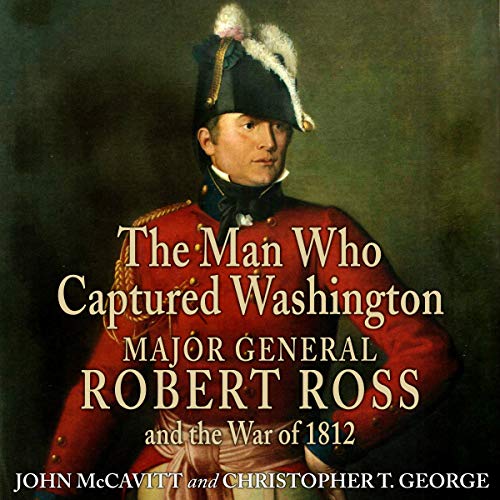 The Man Who Captured Washington

An Irish officer in the British Army, Major General Robert Ross (1766-1814) was a charismatic leader widely admired for his bravery in battle. Despite a military career that included distinguished service in Europe and North Africa, Ross is better known for his actions than his name: His 1814 campaign in the Chesapeake Bay resulted in the burning of the White House and Capitol and the unsuccessful assault on Baltimore, immortalized in “The Star Spangled Banner”. The Man Who Captured Washington is the first in-depth biography of this important but largely forgotten historical figure.

Drawing from a broad range of sources, both British and American, military historians John McCavitt and Christopher T. George provide new insight into Ross’ career prior to his famous exploits at Washington, DC. In detailing this campaign, McCavitt and George clear up a number of misconceptions, including the claim that the British burned the entire city of Washington. Finally, the authors shed new light on the long-debated circumstances surrounding Ross’s death on the eve of the Battle of North Point at Baltimore.

Ross’ campaign on the shores of the Chesapeake lasted less than a month, but its military and political impact was enormous.

“John McCavitt and Christopher T. George have rescued Ross from obscurity to show what an effective commander he was in both the Napoleonic Wars and the War of 1812.” (John R. Grodzinski, author of Defender of Canada: Sir George Prevost and the War of 1812)

“Will become the definitive history of the life of British Major General Robert Ross.... Highly recommended.” (Charles P. Neimeyer, author of War in the Chesapeake: The British Campaigns to Control the Bay, 1813-1814)

What listeners say about The Man Who Captured Washington