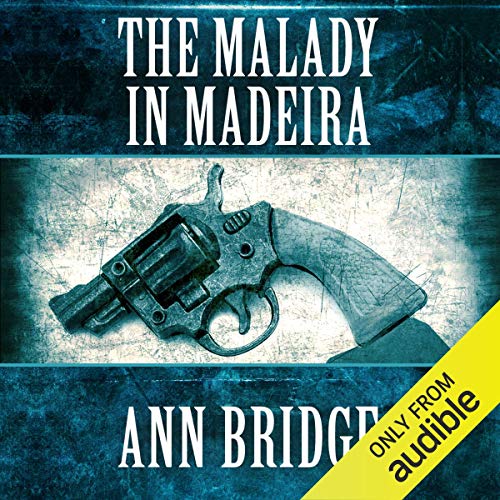 The Malady in Madeira

The Malady in Madeira

The last thing recently widowed Julia Probyn expects to find on the lush and charming island of Madeira is a clue to her husband's mysterious death, for Colonel Jamieson perished somewhere in the wilds of Central Asia while on a top-secret mission for British Intelligence. No sooner does Julia arrive at Madeira with her infant son and his devoted Nanny, however, than a series of strange, sinister, but apparently unconnected events begins thrusting itself upon her.

Displaying her usual intuitive flair for deduction, Julia soon concludes that, for some reason, the Russians are experimenting with a powerful new chemical on Madeira's wild sheep. But why? And why was she told that her husband died "because he went out without wearing his respirator"?

Ann Bridge (1889-1974), or Lady Mary Dolling (Sanders) O'Malley was born in Hertfordshire. Bridge's novels concern her experiences of the British Foreign Office community in Peking in China, where she lived for two years with her diplomat husband. Her novels combine courtship plots with vividly-realized settings and demure social satire. Bridge went on to write novels around a serious investigation of modern historical developments. In the 1970s Bridge began to write thrillers centered on a female amateur detective, Julia Probyn, as well writing travel books and family memoirs. Her books were praised for their faithful representation of foreign countries which was down to personal experience and thorough research.

Like all Ann Bridge’s books, subject dated, personalities and motivations eternal. Compelling characters growing as people as the espionage store develops with lots of amazing insights into international characters and cultures from a person who lived in many foreign countries.

Would you consider the audio edition of The Malady in Madeira to be better than the print version?

I haven't read the print version, but the characters drew me in, and the descriptions of the various interesting aspects of Madeira did as well.

I enjoyed the interesting story- inventive and unusual, and the hierarchy and workings of British intelligence drew me in as well. I will definitely look for more books in this series.

What does Elizabeth Jasicki bring to the story that you wouldn’t experience if you just read the book?

The narrator did a great job of doing many different voices, although it took me a while to get used to her portrayal of the main character, Julia.

Very slow . Definitely of its time. The attitude to mental health issues is scary in the least but also shows how far we've come "have you tried slapping her face?" Voice was annoying . Only read it because I was going Madeira!