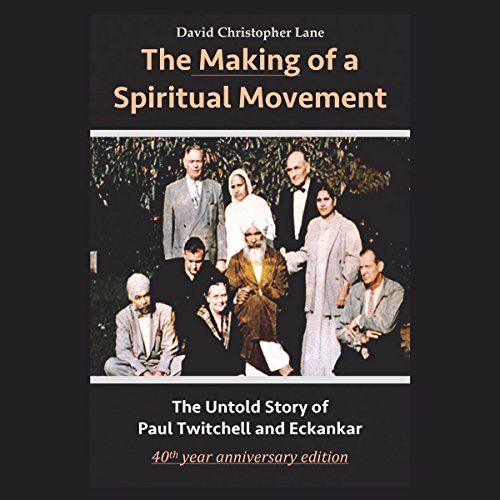 The Making of a Spiritual Movement: The Untold Story of Paul Twitchell and Eckankar

By: David Christopher Lane
Narrated by: Seth Habhegger
Try for $0.00

One of the first critical studies ever done on the hidden history of Paul Twitchell and Eckankar. It was first completed as a term paper when David Lane was only 20 years old as an undergraduate student at CSUN. Later, it evolved into a very controversial book which caused a worldwide stir in the Eckankar organization.

Contains extensive documentation on how Paul Twitchell created a fictional mythology about himself while denying his association with certain spiritual teachers. Also contains correlations of Twitchell's extensive plagiarism. This is a replica of the 1983 edition.

What listeners say about The Making of a Spiritual Movement: The Untold Story of Paul Twitchell and Eckankar

Historically inaccurate and chronically wrong in every sense. I'm not a member of this spiritual group .However, there are multiple times the author expresses a point of view in what they purport that seems hateful and uninformed . I found it to be somewhat bias and misleading based on some of my own independent research on this subject . I would not suggest this book to anyone as I found it boring and false.

The classic and original critique of Eckankar

This was the original book that caused a worldwide controversy in Eckankar because it showed that the founder, Paul Twitchell, had invented the "Eck Masters" that supposedly preceded him and that he had plagiarized extensively from other spiritual books, particularly Julian P. Johnson's The Path of the Masters.

Absolutely essential listening/reading for anyone wanting to know the secret history behind Paul Twitchell and Eckankar.

A lot of details

This was like a thorough investigation of Paul twitchell. I just mostly wanted to hear another person side of the story not so much psychoanalyzing everything!