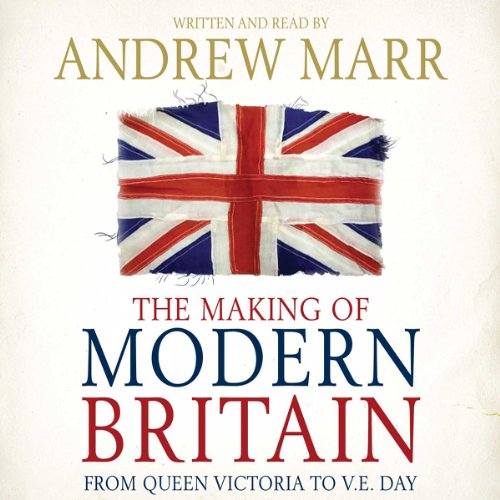 The Making of Modern Britain

In The Making of Modern Britain, Andrew Marr paints a fascinating portrait of life in Britain during the first half of the twentieth century as the country recovered from the grand wreckage of the British Empire.

Between the death of Queen Victoria and the end of the Second World War, the nation was shaken by war and peace. The two wars were the worst we had ever known and the episodes of peace among the most turbulent and surprising. As the political forum moved from Edwardian smoking rooms to an increasingly democratic Westminster, the people of Britain experimented with extreme ideas as they struggled to answer the question 'How should we live?' Socialism? Fascism? Feminism? Meanwhile, the Suffragette movement was taking shape as the popularity of the music hall soared. It was also a time that witnessed the birth of the media as we know it today and the beginnings of the welfare state.

Beyond trenches, flappers and Spitfires, this is a story of strange cults and economic madness, of revolutionaries and heroic inventors, sexual experiments and raucous stage heroines. From organic food to drugs, nightclubs and celebrities to package holidays, crooked bankers to sleazy politicians, the echoes of today's Britain can be heard throughout.

"With insight and flair, Andrew Marr offers an accessible overview of momentous times. Frequently revealing and surprising, his presentation makes this a pleasure to listen to." ( Choice)

What listeners say about The Making of Modern Britain

The Making of Modern Britain is one of the few titles I?ve listened to that I think genuinely benefits from the author narrating. Andrew Marr really does assert his own personality and passion for this period of history. The content itself is illuminating and gives a perspective on the times and personalities that shaped the period that often defies accepted beliefs. There is a good mix of military and social history which sheds light on the life of the average man on the street. Marr highlights both the failings and strengths of the characters and policies that influenced the events of the period. More importantly he clearly and cleverly relates them back to our contemporary society and the foundations laid for our world. Some of these things, such as the troubles in the Middle East, are unsettling and frustrating, whilst others are to be admired and applauded. It moves at a lively pace and is a very enjoyable and informative listen, certainly one of the best non fiction titles I?ve listened to this year.

Magnificent recollection of our recent past

Love this book. I learned more from the audio book than I think I did from both school history lessons and from reading printed copy, could be repetition, but I think more likely that I loved the way Andrew Marr brings the book to life. More details in places whilst would have brought depth, however, it's a good starting point to spark further reading around specific areas. A good book worth, definitely gets my recommendation.

So much information in 1 book!

I would recommend this as it covers so many facts but also gives much more insight behind the historical acts to explain why and how. I appreciate some of this might be the author's opinion but isn't that what all historical writers do?

What does Andrew Marr bring to the story that you wouldn’t experience if you had only read the book?

I very much prefer it when the author reads their own book. The intentions of the book comes across much clearer.

As the pace of the book was so quick, I found myself going back to re-cover old ground. Throughout the book there was much detail but I found myself surprised at the abrupt opinion at the end. Very much enjoyed it and will revisit it again.

What disappointed you about The Making of Modern Britain?

Apart from being abridged, and hence costing me the same (1 credit) as his unabridged books, his treatment of the RAF's bomber offensive against Germany in WWII was superficial and inaccurate. Harris was never called "Butcher" by his aircrews, that was a much later media invention, he was actually called "Bert" or "Butch" - which had a far different meaning from that today. Listening to the narrative I suspect his only sources were Hastings and Irving, neither of whom have a reputation for unbiased scholarship where the RAF is concerned.

Has The Making of Modern Britain put you off other books in this genre?

His performance was fine.

Yes - Marr's political analyses are fascinating - but if I can immediately pick out historiographical errors in my specialization, what errors exist elsewhere in the book ?

Well paced over view of an important period in our history. Original outlook which retains reader concentration throughout. More please.

The Making of Modern Britain

Excellent performance and story of recent history of Britain.. Look forward to story of Brexit Britain.

A great book that rewrites a version of the success of Labour winning under Blair - as a thriller. Really enjoyed it - well read with great characterisation.

yet another easy to listen to book. I t has prompted to read the unedited book, which is obviously longer than this book

I loved this book. Beautifully read by Andrew Marr which adds to its enjoyment. I have read other books by the author and this one is as good as those. Thank you Andrew for reading it and thus adding to the overall experience.